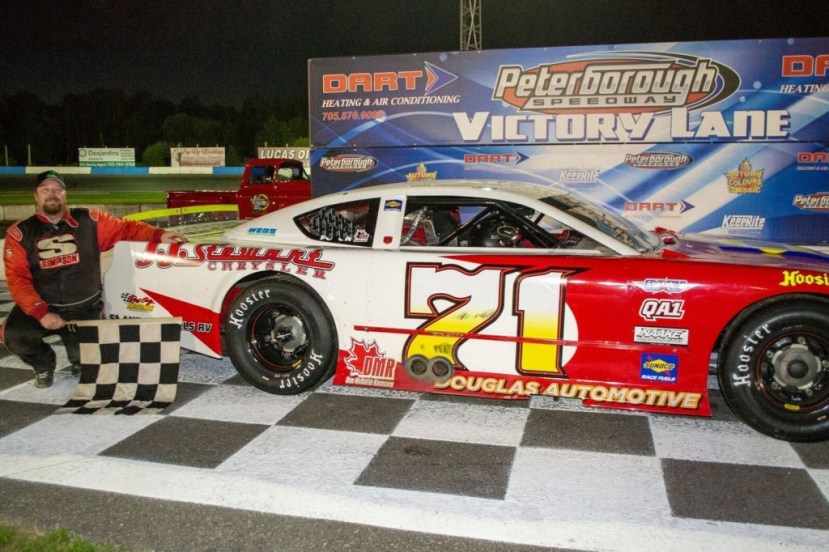 Drivers know it and their fans do too. The clock is ticking and teams in the weekly divisions at the tight, tricky bullring on Mount Pleasant Road are looking to score as many points as possible toward this year’s titles. Saturday, August 24th the hometown Bone Stock, Mini Stock, Super Stock and Late Model runners got their second to last chance of the season to make a difference in the Peterborough Speedway standings and were joined by the traveling Ontario Legends Series.

Feature race action got underway with the first of a pair of 25 lappers for the Trailers Plus Ontario Legends Series, as Nicholas Ledson and Parker Traves brought the field to the green flag. Coming from his front row starting spot, Ledson led the opening laps until a lap five yellow flag for an incident in the second turn slowed his charge. This year’s winner of the Canadian Legend Car Asphalt Nationals started to work through slower traffic, just as another issue brought out the red flag. Current point leader Parker Traves was looking to get around Ledson on the restart, but the #15N ride was too strong. Not even a late race yellow flag could keep him from the win. Dawson Drimmie, Kevin Foisy and Kenny McNicol Jr. followed the leaders across the line to complete the top five.

Ryan Oosterholt and Chris Tubman brought the Battlefield Equipment Rental Bone Stock pack to the Great Canadian RV green flag that kicked-off their 20 lap feature. Kris Khan was strong early and moved into the 2nd spot with just 7 laps on the scoreboard. As the pack started to work around some backmarkers, Tubman took over 2nd place but gave the spot back to Oosterholt as quickly as he’d taken it. Khan held-on for the win in the caution-free feature. Oosterholt, Tubman, Jack Hannah and Steve Finnegan rounded-out the top 5.

With 25 laps on the table, Mark Gordon and Patrick Freel paced the home track Late Models from the staging area for their main event. With just a single lap on the board, the yellow flag waved for an issue in the 4th turn. Back under green, Gordon took the lead but as has been the case throughout the year, Dan McHattie was marching toward the front. Coming from 10th starting spot, he moved into 2nd at lap 6 and had the lead just 4 turns later. Another caution with 7 laps complete slowed his charge but couldn’t delay the inevitable as the current point leader and reigning track champion booked another trip to Dart Heating & Air Conditioning Victory Lane. Dave Morgan, Tim Batty, Gordon, and Freel followed McHattie across the line.

19 Jiffy Lube Mini Stocks came to the line for a 20 lap feature with Tiffany Vandebelt and Nolan Gould on the front row. Gould took the lead early, with former track champion Ryan Babin taking the runner-up spot. Yellow waved on lap 2 for an incident in the 3rd turn. Vandebelt took the lead on the restart, but Gould was in no position to give-up the fight. A hard, single car hit on the front stretch brought out the red flag as the scoreboard showed 8 laps complete. Ryan Oosterholt got close to Gould over the closing stages but couldn’t wrestle away the lead. Vandebelt, Neil Hannah and Babin completed the top five. The Saturday, August 24th Mini Stock finishing order is unofficial, pending completed technical inspection.

With James Townsend and Marlie Owen on the front row, the KOD Disposal Super Stock feature was next on the agenda. The outside line was not friendly to Owen, as Townsend took the early lead, but surrendered the position to his unofficial teammate Mark Gordon, with just 4 laps on the scoreboard. Last week’s winner Tim Burke moved into 3rd spot, while Owen and Howie Crowe battled it out behind him. At the checkered flag, it was Gordon who scored the win. Townsend, Burke, Paul Boundy, and Owen completed the fast five.

The night’s second Ontario Legends Series feature, a holdover from a Saturday, June 1st rainout – had Kenny McNicol Jr. and Jeff Forsey on the front row. McNicol took the lead early but the pace was slowed because of a yellow flag with only a single lap on the scoreboard. Kevin Foisy was looking for a turn at the front of the field and moved into the runner-up spot on the restart. Searching high and low, he wasn’t able to take over the top position and faced a challenge from Nick Ledson who slid into 2nd with 6 laps complete and took the lead 9 circuits into the 25 lap affair. Foisy kept trying but could only get close to the leader over the closing stages. Parker Traves, Adam Cuthbertson, and Dawson Drimmie completed the top 5 as Ledson once again swept the pair of feature events.

All posted finishing positions are unofficial and subject to scoring review, as well as post-race safety and technical inspection.

Bullring bullet points: Bob Grevey picked-up the night’s 50/50 prize of more than $450, in support of the Millbrook Lions Club; while Ashton Taylor and Madison Knisley won tickets to the NASCAR Gander Outdoors Truck Series race at Canadian Tire Motorsport Park…Former Pro Challenge and current APC Late Model Patrick Freel stepped-into the #38B in place of Kyle Batty, while Ashley Hannah drove Steve Brier’s #71 Mini Stock. Tim Tolton made his first Peterborough Speedway start of the year in the #13 Mini Stock…Veteran racer Norm Benning was on hand to watch the action, ahead of his race with the NASCAR Gander Outdoors Truck Series at Canadian Tire Motorsport Park. Benning donated a couple of team t-shirts as prizes for lucky fans.

Peterborough Speedway’s 2019 regular season concludes – Saturday, August 31st – with the Championship Clash. It’s the final point paying event for the hometown Bone Stock, Mini Stock, Renegade Truck, Super Stock and Late Model divisions; along with the Ontario Modifieds Racing Series. Also on the schedule will be the annual Top 10 Shootouts for all weekly classes. Pit gates open at 12:30 p.m, with the spectator grandstands unlocked at 3:00 p.m and racing at 5:00 p.m.