MILGROVE, Ontario — It came down to a tie-breaker, but J.R. Fitzpatrick ultimately punched his ticket for Canadian Short Track Nationals at Jukasa Motor Speedway, virtue of his performance on Saturday night at Flamboro Speedway.

Gilbert would grab the early lead on Lap 1 ahead of McGlynn, Mark Burbridge, Albers, Gallinger, and Di Venanzo. Burbridge moved up into second on Lap 3, bringing Albers through with him. McGlynn now ran fourth, as Chenoweth and Fitzpatrick battled for fifth. Fitzpatrick got the spot on Lap 5, ahead of Chenoweth and Gallinger.

The contact would start on Lap 6, with Klotz, Westwood and Corcoran going three-wide off of turn two, bouncing off of each other. Corcoran got the blunt of it, sliding through the backstretch grass, ultimately taking him out of contention. 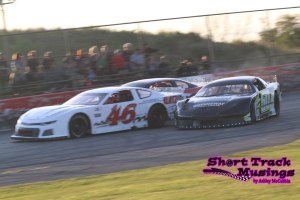 There’d be no caution for the incident, as Gilbert continued to lead ahead of Burbridge, Albers, Fitzpatrick, Chenoweth, McGlynn, Di Venanzo, Rick Burbridge, Howse, Gallinger, and Westwood.

Fitzpatrick would get alongside Albers for third on Lap 10, completing the pass a lap later. Chenoweth followed through for fourth, bumping Albers back to fifth ahead of McGlynn, Rick Burbridge, Di Venanzo and Howse. Howse would move up into eighth on Lap 14, passing Di Venanzo, with the caution coming out four laps later for Pirie going around in turn two.

Gilbert got a good restart, with Fitzpatrick moving up into second ahead of Chenoweth before the second caution on Lap 19 for Westwood going around. As the field checked up under the yellow flag, Albers would spin Mark Burbridge around on the backstretch; both drivers continued no issue. The restart brought forth the third caution, as Gallinger made significant contact with the frontstretch wall.

The second attempt was clean, with Fitzpatrick grabbing the lead, as Chenoweth moved into second a lap later ahead of Gilbert, Mark Burbridge, and Albers.

The second feature did not start off smoothly, with Tanner Pirie and Chad Corcoran getting tangled up together on the backstretch on Lap 1. The restart was not any smoother, with Shawn McGlynn and Mike Klotz both going around on the backstretch. 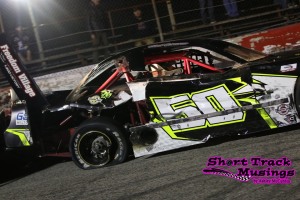 The third attempt to start the race went smoothly with Mark Burbridge holding the lead ahead of Tyler Di Venanzo, Chris Howse, Kevin Albers, Shawn Chenoweth and J.R. Fitzpatrick. Chenoweth would pass Albers for fourth on Lpa 4, bringing Fitzpatrick through with him.

Albers would then go for a spin on Lap 5, followed by Westwood spinning a lap later. Neither incident brought out the caution, but the yellow flag was displayed on Lap 8 when McGlynn and Jake Gilbert spun in turn two.

Burbridge held serve on the restart, with Chenoweth up to second ahead of Fitzpatrick and Tyler Di Venanzo. The yellow flag resurfaced, though, this time on Lap 10 for Mark Burbridge spinning Chris Howse in turn two. At the same time, Klotz made contact with the outside turn three wall.

The first attempt at a restart would be called back due to Chenoweth jumping. The second attempt was clean, with Chenoweth taking the lead as Fitzpatrick made contact with Rick Burbridge. Burbridge was able to hold onto the second spot, with Di Venanzo alongside Fitzpatrick for third. Fitzpatrick got third, passing Burbridge for the second on Lap 13. Di Venanzo would fall back to sixth, as he was passed by Albers and Mark Burbridge over the next three laps.

Fitzpatrick would begin to reel Chenoweth in, as the pair weaved through lap traffic. As the laps wound down, they caught up to the back of Westwood and Carson Nagy, who were side-by-side for 10th. This would allow Fitzpatrick to draw alongside Chenoweth, but he was unable to clear him.