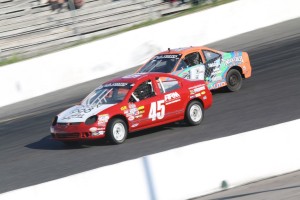 Tyler Seaboyer went for the daily double ahead of Holmes, Smith, Bos, Maltese, Thompson, and Rainey. 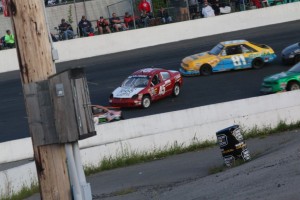 The feature would not start out smoothly, with Holmes spinning Bullen on the opening lap, with D’Antimo spinning after the yellow flag was displayed.

The second attempt to start the race would go smoothly, with Seaboyer making the three-wide move down the backstretch to take the lead, leaving Wakeling and Phinnemore to battle three-wide for second with Maltese. Phinnemore got the spot, with Shaw moving up into third ahead of Smith. Shaw then made her way up into second, bring Smith through with her. Phinnemore now ran fourth ahead of D’Antimo, Stewart, and Bullen.

Holmes would get alongside Bullen for seventh on Lap 5, ahead of Bos, with contact happening, resulting in Bullen going around in turns three and four. Thompson would head down pit road under caution, done for the event. With 21 laps to go, Seaboyer led Shaw, Smith, Phinnemore, D’Antimo, Stewart, Bos, Wakeling, Rainey, Maltese, Welles, and Holmes.

The restart would see a battle for the lead between Seaboyer and Shaw, but the third caution then came out on Lap 7 for D’Antimo and Phinnemore getting together, collecting Bos. With 29 laps to go, Seaboyer led Shaw, Smith, Stewart, Bos, Wakeling, Holmes, Rainey, Maltese, Welles, D’Antimo, and Phinnemore.

Shaw would get a good restart to snatch the lead ahead of Seaboyer, Smith, Stewart, Bos, and Holmes. Holmes would then get alongside Bos for fifth on Lap 9, completing the pass a lap later. He then passed Stewart to move up into fourth on Lap 11. Behind them, Bos ran sixth ahead of D’Antimo and Wakeling, with Phinnemore and Rainey side-by-side.

The front of the field would be close, too, with Seaboyer and Shaw side-by-side for the lead. Unfortunately, contact happened on Lap 12, resulting in Shaw going around in turns one and two. With 14 laps to go, Smith led Holmes, Stewart, Bos, D’Antimo, Wakeling, Phinnemore, Rainey, Maltese, Welles, Shaw, and Seaboyer.

The battle for the lead wasn’t over yet, with Smith getting back alongside Holmes on Lap 19 as Shaw moved into third ahead of Bos. Holmes held off the charge ahead of Smith and Shaw, with Seaboyer and Bos side-by-side for fourth on Lap 21. Seaboyer took the spot a lap later, ahead of Bos, Stewart, D’Antimo, and Wakeling as Phinnemore and Rainey continued to battle.

Shaw continued her climb forward, getting alongside Smith for the second spot on the white flag lap.