It came down a late race restart, but it’d be Dwayne Baker winning the Sauble Falls Tent and Trailer Park Late Model feature at Sunset Speedway. 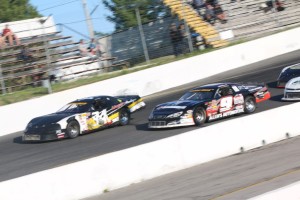 The third heat did not start off smoothly, with Maltese spinning Inglis in turn three on the opening lap. Gord Shepherd picked up the win ahead of Spencer-Walt, Maltese, Adams, Sikes, Inglis, Montanari, and McIssac.

The drop of the green flag would see a battle between Spencer-Walt and Shepherd for the lead, as Baker and Goetz battled for third. Shepherd grabbed the lead on Lap 2, with Baker moving into second a lap later as Goetz challenged Spencer-Walt for third.

Goetz moved into third on Lap 5 ahead of Spencer-Walt, Maltese, Travis Hallyburton, Wilkinson, and Quesnelle, as Adams and Sikes battled for ninth ahead of Thayne Hallyburton. Goetz would challenge Baker for second on Lap 8, taking the spot two laps later, with Spencer-Walt alongside Baker for third.

Goetz then tracked down Shepherd for the lead, getting alongside him on Lap 11 as the battle for third continued. Further back in the field, Adams and Thayne Hallyburton both had managed to make their way by Sikes for ninth and 10th, respectively. 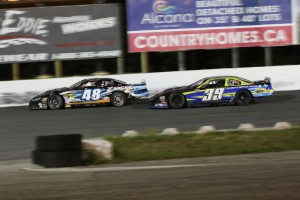 Goetz moved into the top spot on Lap 14 ahead of Shepherd, Baker, Spencer-Walt, Maltese, and Travis Hallyburton. Spencer-Walt then got alongside Baker for third on Lap 16, completing the pass a lap later. Maltese continued to run fifth ahead of Hallyburton, Wilkinson, and Quesnelle.

With 19 laps on the board, Goetz led ahead of Shepherd, Spencer-Walt and Maltese, with Hallyburton alongside Baker for fourth ahead of Wilkinson, Quesnelle, and Adams. Baker held onto the spot, keeping fourth as the top-eight remained unchanged.

Thayne Hallyburton ran ninth ahead of Sikes, Fumerton, Inglis, Montanari, and McIssac.Baker would get alongside Maltese for fourth on Lap 26, completing the pass two laps later as Travis Hallyburton continued to run sixth.

Spencer-Walt would then get alongside Shepherd for the top spot on Lap 32, completing the pass two laps later. Goetz continued to run third ahead of Baker, with Maltese and Travis Hallyburton side-by-side for fifth on Lap 36. Behind them, Wilkinson ran seventh ahead of Quesnelle, Adams and Thayne Hallyburton, as Fumerton and Sikes battled for 11th, with Inglis and Montanari side-by-side for 13th.

Goetz would then challenge Shepherd for second on Lap 39, but was unable to clear him as they went around the lapped car of Stefan Semeraro. Baker continued to run solidly in fourth ahead of Maltese, Travis Hallyburton, Wilkinson, Quesnelle, Adams, Thayne Hallyburton, and Sikes.

The race appeared to have a green flag outlook for the laps counting down to the end, but that wasn’t to be the case. The caution came out on Lap 44 for Fumerton spinning off of turn four. Sikes would head down pit road, requiring a tire change due to a flat.

The restart would allow Baker to move up into second, before the caution came back out on Lap 46 for Fumerton spinning in turns three and four. The first attempt at a restart would produce the third caution as Baker was deemed for jumping the start.