HAMILTON, Ontario — Following a pair of features, it’d come down to a tie for the Canadian Vintage Modifieds’ overall winner on Doc Roper night at Flamboro Speedway. As a result, both T.J. Marshall and Mike Podd were credited with the victory. 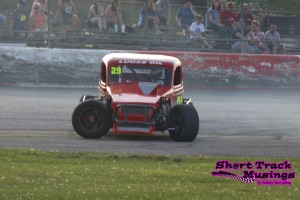 The race did not start out smoothly, with contact in the opening laps resulting in a caution and a bent wheel for Henwood. John Karley would grab the lead on the restart ahead of McIntyre, Wright, Podd, Marshall, Barton, Trendell, Klotz, and Stoner. The race would not stay green, with the second caution coming out on Lap 7 for Wright spinning McIntyre.

Karley would get a good restart, with Marshall now up to second ahead of Podd, Barton and Trendell, as Klotz and McIntyre battled for sixth. Unfortunately, Barton’s strong run came to an end on Lap 10 as he ran into a mechanical issue. This allowed Trendell to move up into fourth ahead of Klotz, McIntyre, Wright, and Stoner.

Wright would get alongside McIntyre for sixth on Lap 14, completing the pass a lap later. The mechanical issues also continued, with Klotz slowing and heading pit side on Lap 17 with an issue. There’d also be a late caution with two laps to go, as a result of Wright spinning in turns three and four.

Podd and Wright battled for the lead on the opening lap, with Podd taking the top spot on Lap 2, with Marshall getting by Wright for second. Behind them, McIntyre ran fourth ahead of Karley, Trendell, Barton, and Stoner. Karley would then get alongside McIntyre for fourth on Lap 8, completing the lead a lap later.

Despite being challenged all race long, Mike Podd was able to hold off the challenge from TJ Marshall to pick up the victory. Max Wright finished third, followed by John Karley, Ian McIntyre, Steve Trendell, Jeremy Barton, and Amanda Stoner. Mike Klotz and Daryl Henwood would not take the green flag.