While questions continue to be raised across the province about car counts, there is still some great competition happening at each of the speedways. So in hopes of creating some buzz, here are some thoughts for you to ponder.

Just as he done so over the past couple seasons, Brad Collison is once again leading the way at Flamboro Speedway with a significant points lead over the rest of the field. He has also been fortunate to visit victory lane on four different occasions, with only one finish outside of the top-two this season.

However, that shouldn’t take anything away from his competitors. Nick Troback has also been fortunate to visit victory lane on four occasions, with just one finish outside of the top-five. Justin Collison is also on the verge of adding to the win column following a runner-up on Saturday, joining those mentioned along with Randy Rusnell and Brandon McFerran.

The tight bullring may initially be considered a deep challenge for the province’s youthful squad of competitors, but that doesn’t mean they aren’t finding a way to shine.

Cory McAllister has been fast since debuting his new car, with a victory in his first start on May 25, followed by winning three of the last four All Muscle Sportsman class features. In eight feature races, he has won half of them with no finishes off of the podium. 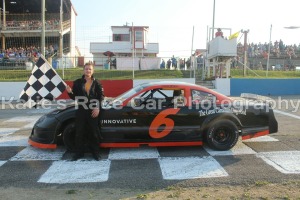 Travis McLean is showing another year under his belt and home track feel does a driver good as he visited victory lane this past Saturday night in the first feature. He has scored five top-five finishes in six starts.

Five features in the books at Sunset Speedway, with each week producing a new winner. Frank Davey, Tom Walters, Ethan Constable, Coltin Everingham, and Brandon Passer have been able to hold the checkered flag in 2019.

Don’t expect the variety of winners to stop anytime soon, either, as there are a couple guys knocking on the door. Gerrit Tiemersma scored a runner-up on Saturday night to go with three top-five’s in five races, while Dustyn Mombourquette could be the best driver to not yet win a feature at Sunset Speedway in his career. He has the drove the No. 6m St. Onge Recreation Super Stock to three top-five’s in the six races with a runner-up on June 30.

4. Tough Running at the Patch

Things have not gone totally smooth at Peterborough Speedway with their fair share of incidents and contact. However, there has been some great racing along the way with Dan Archibald snagging a pair of features, with Mark Gordon and Howie Crowe winning the other two. Archibald’s success should continue as he has shown to have one of the quickest cars each week, though ultimately cost himself this past weekend with a couple incidents.

If you’re looking for different faces to reach victory lane, keep an eye on Paul Boundy and Marlie Owen. They’ve been both been making headway towards making that happen thus far, including a runner-up for Boundy on the second night of competition.

Three features are in the books for Sauble Speedway this season, and it’s been the same face each week with Marvin Freiburger winning them all. The success for the No. 37 is no surprise, given the amount of laps he has logged at the beach and his Limited Late Model experience.

However, it’d be a surprise to see him carry the dominance all season long with past champion Ken Grubb, past Frostoberfest Champion Steve Ecker, and Cory McAllister among the drivers competing each week.