Making his first start of the season at Sunset Speedway, David Rockwood was fast from the drop of the first initial green flag en route to winning the Signs of Innovation Bone Stock feature.

The first heat did not go smoothly, with Aundrea Lusk breaking with two to go while Ken McCormick lost a wheel. Phil Givens picked up the win ahead of Jeff Laflamme, Ryan D’Antimo, James Potentier, and Andrew Shilling. 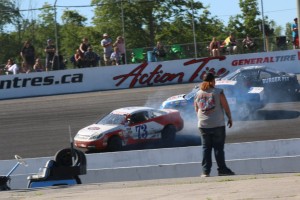 Come feature time, Rockwood jumped out to the early lead ahead of Laflamme and McGregor. McGregor would get alongside Laflamme on Lap 2, completing the pass for second a lap later. Dunlop ran fourth ahead of Lusk, Givens, D’Antimo, Morris, Pontentier, and Froude. The battle for fifth got interesting on Lap 6, with Givens and D’Antimo taking Lusk three-wide. D’Antimo got the spot a lap later ahead of Lusk, with Morris getting alongside Givens.

With nine laps on the board, Rockwood led McGregor, Laflamme, D’Antimo and Dunlop, with Givens and Morris side-by-side for sixth. Givens got the spot on Lap 11 ahead of Morris, with Lusk rounding out the top-eight. D’Antimo would then get by Laflamme for third on Lap 14, with Givens and Morris passing Dunlop a lap later. Dunlop now ran seventh ahead of Lusk, Froude, Boyes, and Bullen. Froude would then get by Lusk with three laps to go.