Making his return behind the wheel for the first time in a couple of years, Chris Morrow scored the victory in the second Sauble Falls Tent and Trailer Park Late Model feature at Sunset Speedway.

The opening lap saw a battle for the lead between Quesnelle and Baker, with Morrow moving into third ahead of Holdaway and Emms, as Zardo and Maltese battled for sixth. Zardo got the spot on Lap 5, bringing Spencer-Walt through with him, Zardo and Spencer-Walt then both got by Emms, bumping him back to seventh.

Travis Hallyburton would be the next driver to challenge Emms for position, which unfortunately did not go well as contact ensued, with both drivers going around for the first caution in turn four at Lap 7.

The restart would see the top-six running in a pack, side-by-side three rows deep with Quesnelle and Baker side-by-side at the front. Baker would grab the top spot on Lap 9, with Holdaway getting alongside Quesnelle for second. Holdaway got the spot a lap later, before pulling off the lane swith-a-roo to get underneath Baker for the lead.

Unfortunately, the battle for the lead did not go as planned, with contact sending both Baker and Holdaway around. As the field tried to avoid, Morrow would get into the back of Spencer-Walt to send him spinning, with Quesnelle stopped in the midst.

Once the dust settled and the race officials chose who to send to the tail, it’d be Morrow restarting first ahead of Zardo, Semeraro, Maltese, Sikes, Fumerton, Thayne Hallyburton, Richards, Adams, Inglis, Montanari, Travis Hallyburton, Holdaway, Baker, Quesnelle, Spencer-Walt, Emms, McIssac, and Muttart. Sikes was then sent to the tail of the field as well before the restart.

The restart would see Morrow and Zardo side-by-side for the lead, with Morrow taking the top spot on Lap 11 ahead of Zardo, Maltese, Semeraro, and Fumerton. Behind them, Thayne Hallyburton and Richards battled for sixth, with Hallyburton getting the spot on Lap 14. Travis Hallyburton followed suit a lap later, bringing Fumerton and Adams with him. 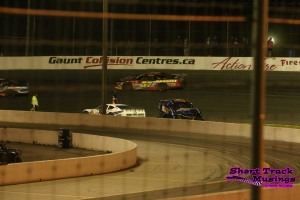 The Hallyburton brothers then got alongside each other, with Travis Hallyburton getting by for sixth before the caution came out for an incident in turns one and two. Stefan Semeraro would go around, with Spencer-Walt getting collected as he had nowhere to go.

Morrow got a good restart to keep the lead ahead of Zardo, Thayne Hallyburton and Maltese, with Holdaway and Richards side-by-side for fifth. Holdaway would clear him, followed by challenging Maltese for fourth a lap later.

With 25 laps on the board, Morrow led Zardo, Thayne Hallyburton and Holdaway as Adams, Richards, and Maltese went three-wide for fifth. Adams would come out on top ahead of Richards and Maltese, with Travis Hallyburton and Fumerton side-by-side for eighth. Hallyburton got the spot, bringing Spencer-Walt through with him on Lap 30.

The battle for the lead got interesting in the final stages, as Zardo was able to stay right with Morrow. He was able to tag the back bumper of the No. 10s Late Model, but the veteran held serve with the lead ahead of the field.