Although the drivers were ready to put on a show at Sunset Speedway in the Sauble Falls Tent and Trailer Park Late Model division, mother nature had other plans as she only allowed two features to get put into the books, along with a single round of heats at Spring Velocity.

All that means moving forward is the drivers will be itching that much more to get to victory lane. 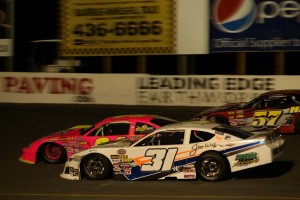 2 points is all that separates Rick Spencer-Walt and Nick Goetz at the top of the standings.

2 drivers finished both features to date in the top-five – Spencer-Walt and Goetz.

2nd is the best average feature finish of any driver this season, set by Spencer-Walt

3rd is the second-best average finish of any driver this season, set by Goetz.

4.5 is the third-best average finish of any driver this season, set by Dwayne Baker.

7 points is all that lies between the top-five in the standings – Spencer-Walt, Goetz, Baker, Ron Quesnelle, and Travis Hallyburton – meaning that it’s still anybody’s championship to win

7 drivers finished both features to date in the top-10.

8 drivers have scored a feature top-five finish this season.

10 drivers have scored a heat top-five finish this season.

13 drivers have scored a feature top-10 finish this season.

14.62 seconds was the lap of record for Danny Benedict en route to topping qualifying on May 11.

14.821 seconds was the quickest lap during the second feature on May 11, set by Goetz. The first feature did not record correctly in Race Monitor to check the times properly.

14.958 seconds was the quickest lap set during the pair of heats on May 19, set by Freiburger.

19 points is all that separates the top-10 drivers.

28 points is all that separates the top-15 drivers.

48 of Baker won the second feature of the season with a dramatic last lap pass.

54 of Benedict won the first feature of the season in dominating fashion by leading every lap.

85 points is all that separates the top-20 drivers.