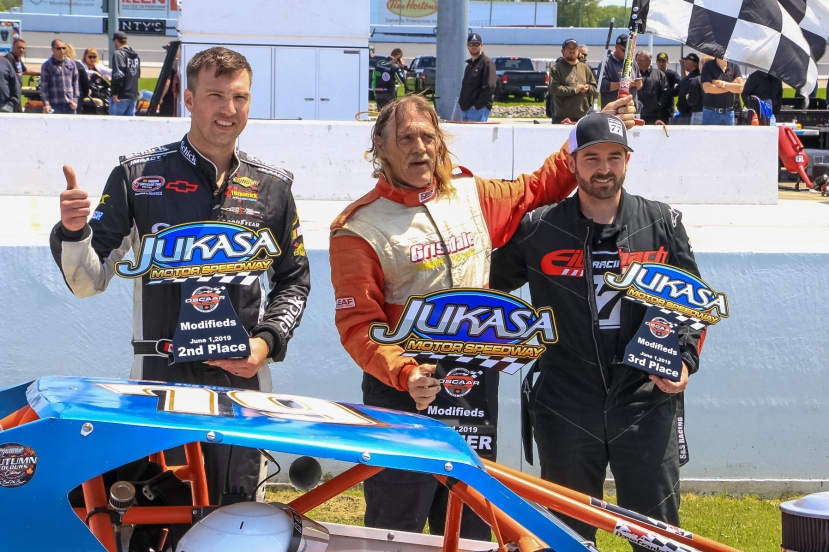 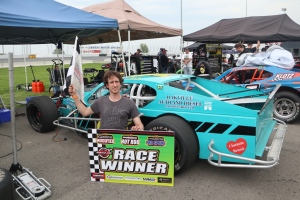 Come feature time, Chad Strawn took the early lead off of the front row, beginning to put a gap between himself and J.R. Fitzpatrick, as John Harper, Jason Keen, and Justin Demelo rounded out the top-five. The leaders would string out mostly single-file through the first 15 laps, leaving the battles to positions sixth on back.

Despite running mostly single-file, the leaders did not lose touch with each other, as Justin Demelo made the pass on Jason Keen to take over the fourth spot just before halfway. Behind rookie Norman Newman continued to hold serve, despite being challenged by veterans Shawn Chenoweth and Cory Horner.

At the front of the field, Harper began to reel in Strawn for the top spot as Strawn began to fade a little bit. The battle would not last for long, with Harper taking the top spot on Lap 27.

It appeared as though the veteran would cruise to his first career modified victory after pacing Saturday’s practice, however the race’s complexion would change when the caution out with three to go for Bryan Batty slowing on track.

John Harper was able to get away on the late race restart to win the 40-lap feature ahead of J.R. Fitzpatrick and Chad Strawn. Jason Keen and Cory Horner rounded out the top-five, ahead of Norman Newman, Dale Reinhart, Anthony DiBello, Shawn Chenoweth, and Luke Gignac.

The 40-lap feature was broadcast via FansChoice.tv to race fans across North America. You can watch the broadcast on their website at https://www.fanschoice.tv/events/oscarr-features-6-1-2/.

The Queenston Chevrolet Buick GMC OSCAAR Modifieds are back in action on June 15 with their return to Delaware Speedway, with their feature presented by The Fyre Place and Patio Shop.