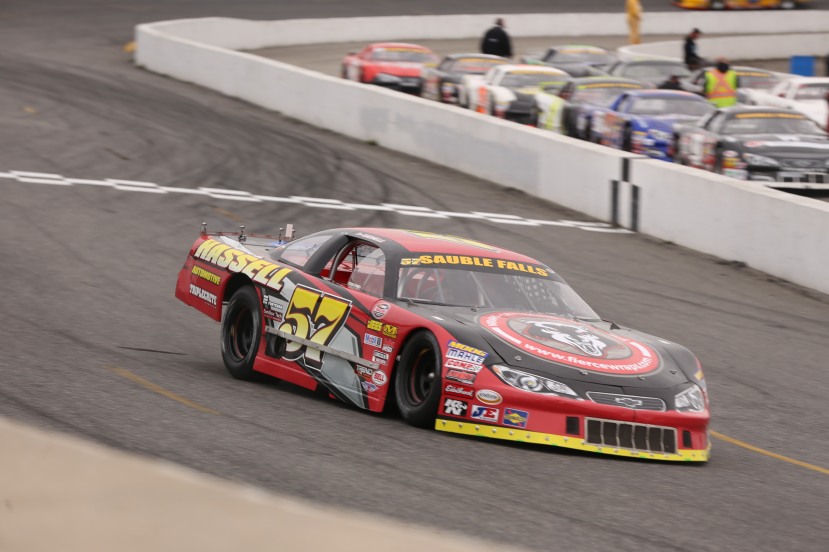 INNISFIL, Ontario — The hard work through the off-season paid off as Ron Quesnelle ran up front throughout both features en route to a pair of top-10 finishes.

Quesnelle started off the night by posting a quick lap of 14.815 seconds in time trials, qualifying ninth for the first 35-lap feature. He ran there solidly right until the race’s first caution at Lap 30 for a spin in the back half of the field. Restarting ninth, he would avoid an incident ahead of him to gain a couple positions. He then got another solid restart, crossing the finish line in seventh.

Starting on pole for the second 35-lap feature, he would drop back into second on Lap 3, remaining there until the caution came out at Lap 12 for an incident mid-field. Quesnelle got a good restart, enabling him to take the lead before the next caution at the halfway mark. Restarting on the outside, he was able to keep the No. 57 Late Model out front, beginning to pull away from the field by a couple car lengths.

As the race neared the final stretch, though, his competitors began to catch back up with Nick Goetz getting alongside him for the top spot with six laps to go. Rick Spencer-Walt would then take the pair of them three-wide down the backstretch, with Quesnelle on the outside. It would not work in his favor, as Quesnelle got a little sideways off of turn four, tagging the wall slightly. He would fall back a couple spots as a result, crossing the finish line with a fourth-place finish.

Quesnelle will be back at Sunset Speedway for the second night of racing, scheduled for Sunday, May 19 with the Spring Velocity 75-lap feature. The full schedule can be viewed at http://www.sunsetspeedway.ca.