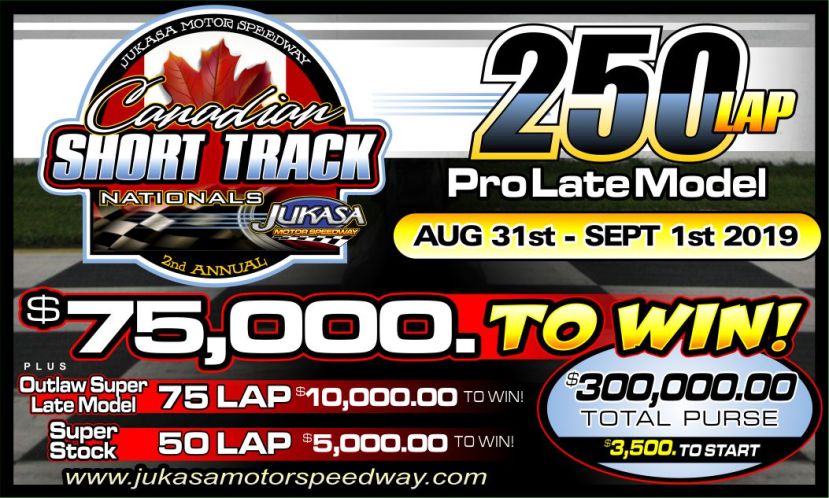 Hagersville, Ontario (January 2, 2019) – Jukasa Motor Speedway is pleased to announce significant major events for 2019. We are excited to unveil seven marquee weekends for 2019 that we feel will give our fans a diverse slate of motorsport events with the best touring series complimented by a host of great local divisions plus the NO-Club Season Opener Car Show & Jamboree that will prove to be an exciting 2019 season at Canadas Crown Jewel. “We feel that we have an exciting schedule for the upcoming season and we wanted to get these dates out so competitors and fans alike can plan for 2019, we have added some new twists to our schedule that we hope everyone will enjoy” said Alex Nagy general manager of Jukasa Motor Speedway.

We will kick off our season on June 1st with the first oval race of the year for the NASCAR Pinty’s Series with a 200-lap race along with the hugely competitive OSCAAR Modified and Hot Rod Series. The Pinty’s Series has put on some incredible races here at JMS and there is no doubt 2019 will be no different. The next weekend, June 8th – 9th we will host the No-Club season opening Car Show and Jamboree with a slate of activities to be announced for Saturday and finishing up on Sunday with a car show etc., there will be some announcements coming soon regarding this event. June 22nd will be the first of two events featuring the APC United Late Model Series which is Ontario’s best and ultra-competitive touring Late Model series that is full of star power and they will be joined by the Super Stocks. This event is the “Prelude to the Nationals” where the winner of each division will earn a guaranteed starting spot at the Canadian Short Track Nationals on Labour Day weekend.

July 13th will be the return of the International Super Modified Association for the Queenston Chev 50 lap and the Rankin Construction 100 lap for the ROC Modified Series. These two series both have competitors from north and south of the border, it will be one of the most exciting open wheel events of the year. For our second APC United Late Model Series race we are going to do something a little different with a Thursday night race on July 25th and they will be joined by the Mini Stocks for their first visit to JMS. NASCAR star and fan favourite Kenny Wallace with his infectious personality will be coming back to Jukasa and he will be competing for the win in the 100-lap affair, watch for details on some activities on the Wednesday that will include Kenny Wallace.

The second annual Canadian Short Track Nationals will take place again on Labour Day weekend, August 31st-September 1st. Saturday will see the Outlaw Super Late Models headline the day with a $10,000.00 to win 75 lap race, these cars are fast and the race will be filled with the best from Canada and the United States. Also racing on Saturday will be a return visit from the nostalgic OSCAAR Hot Rods plus inspection, practice and qualifying for the Pro Late Models setting the stage for the huge 250 lap event on Sunday. The ultra-exciting Super Stocks will move in on Sunday morning and will get ready for the Saugeen Shores Transmission $5,000.00 to win 50 lap feature prior to the 250 lap $75,000.00 to win Pro Late Model race which will be the richest Late Model short track race in North America. We expect that all four races during the weekend will attract the best drivers and teams from coast to coast in Canada and the USA. Many more details to come in the future regarding this huge weekend.

We will round out our 2019 race season by hosting the NASCAR Pinty’s Series Finale on September 28th with the Pinty’s Fall Brawl where we will crown the Series National Champion once again, this race is always exciting and full of drama. Also, on the card for this event is the Limited Late Models which put on very competitive races and the class is loaded with talent so we are excited to have them with us again. The NASCAR Pinty’s Series Finale never disappoints.

We’re very happy to welcome such a diverse group of sanctioning bodies and local classes to Jukasa in 2019. Having all these groups definitely enhance our racing program and provide our fans with a nice variety. “We are excited to get going and look forward to seeing everyone throughout 2019,” Nagy concluded. Event info such as ticket sales, camping etc. will be announced in the coming months.

*** Sales for tickets and camping will be released soon!

About Jukasa Motor Speedway – Jukasa Motor Speedway is a .625-mile paved speedway located in Hagersville, Ontario, Canada. The track first opened in 1966 as Cayuga Speedway and remained opened until it ceased regular operations in 2010. With new ownership in 2016 the facility underwent extensive renovations. Among the changes at the facility include a complete redesign and asphalt recovering of the racing surface and upgrades for competitors and fans throughout the entire 350-acre site. The facility can also accommodate nearly 800 campsites with many offering services to campers. For more information on Jukasa Motor Speedway visit their Facebook page, Instagram and Twitter @Jukasamotor or http://www.jukasamotorspeedway.com