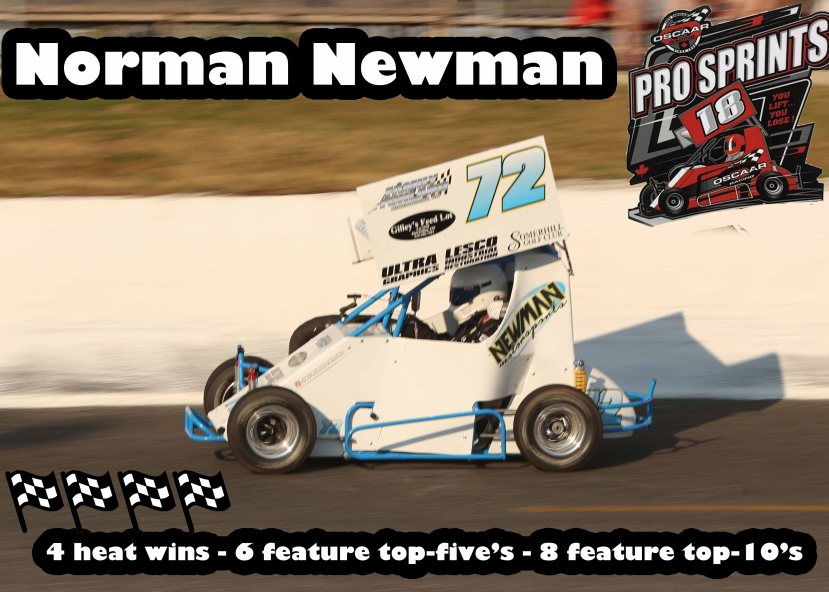 For Newman, the gremlins began right out of the gate at the season opener, with the issues causing him to miss the night of competition. Returning back to Sunset Speedway at the beginning of July, he came with a vengeance. He won both of his qualifying heats, battling inside the top-five all feature long en route to a third-place finish.

He carried the momentum with him to Flamboro Speedway, scoring a pair of runner-ups in qualifying before once again finding the top-five all feature long en route to a fourth. He’d experience similar results in his first trip to Sauble Speedway, scoring a heat victory before placing second to Daniel Hawn in the feature.

While he showed speed during qualifying at Grand Bend Speedway with a heat win, everything went away in the feature. He’d be one of the drivers involved in a mid-race incident during Saturday’s feature, which caused issues resulting in him having to pack it up early on Sunday.

The gremlins followed him back to Sunset Speedway, as he headed pit side during the first feature on Lap 7 with a mechanical issue. He was able to fix the problem at the speedway, finishing the second 25-lap event on the night with a fifth-place finish. Unfortunately, both features at Flamboro were met with a similar fate, as he failed to finish inside the top-10 in both of those.

Newman was able to finish off the year strong despite the problems that plagued him through the month of September, though. At Peterborough Speedway’s Autumn Colours Classic, he led a pair of laps in the first feature before fading back to finish third. He then started pole for the second 25-lap event, fighting his way back to place fourth after going for a mid-race 360 degree spin.

With the bugs appeared to be worked out of the No. 72 Pro Sprint as the year came to a close, expect Newman to be one of the drivers to watch early in 2019. He will have his hands full, as the team made an off-season purchase that will also shake up one of the other OSCAAR divisions.