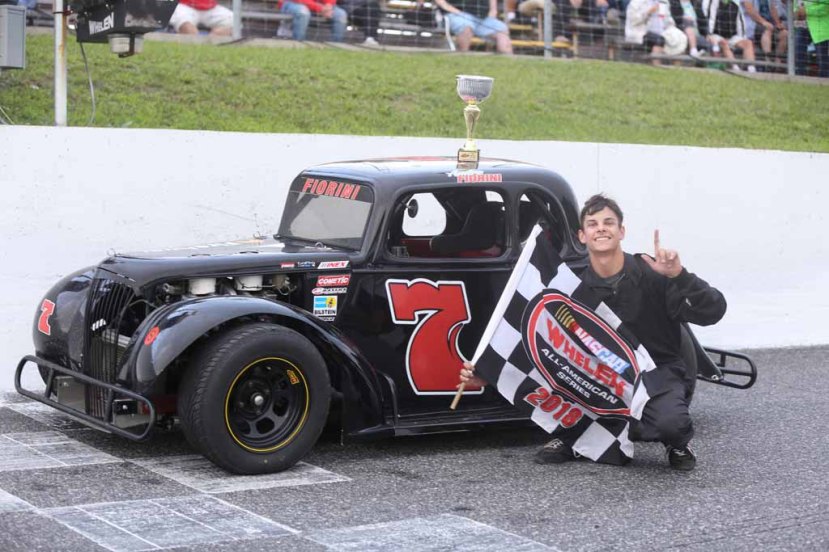 After inching closer to the front each season, everything came together for Andre Fiorini as he ran up front with the leaders throughout the Ontario Legends Series season on a weekly basis.

“2018 was a blast, looking back on the season; it was a big year for us speed wise,” he told SHORT TRACK MUSINGS. “Dad and I learned a lot over the winter on the car. I was able to win two features, and get my very first at Sunset (Speedway).”

The breakthrough moment for him came at Sunset Speedway in August, when he was able to sweep the pair of features. He would take the lead following a mid-race incident in the first feature, leading the rest of the way, followed by taking the lead on Lap 7 in the second event and never looking back.

“To finally break through and get a win on my 11th ever race was huge,” he said. “Got the monkey off my back and I feel it was a statement to establish us as a car the other racers are going to have to beat each week.” 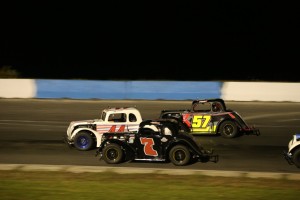 Being fast in the Legends Series seems to be no easy task, as the fields continue to grow each year with added talent, with full fields of about 25 cars every single race weekend.

“The Legend Series is great – tons of competition and lots of cars,” Fiorini said. “I enjoy them primarily because of how hard they are to drive. The power to weight ratio on a street tire makes it quite a workout inside. Plus I enjoy the old style body looks, so it puts us apart from being another stock car class.”

The fan following seems to only increase moving forward, with the competition continue to get faster and closer each year.

“You can’t just find a setup and win and stop,” he said. “You’ve always gotta be trying to find new things to give you that extra tenth of a second. New cars every year which is great for the series.”

While the series is set to go through a shift with new water cooled engines in 2019, Fiorini admits that is not in the team’s funding plans, so his father and him plan to “focus on just being faster every time back at the track” when they do come out.

“I like to keep quiet,” he said, speaking of next season. “I’m a big fan of the World of Outlaws series, based on you never know who will show up at the track. It’s like a surprise if the 7 will be there.”

For Fiorini, his interest in racing developed through his dad, who was always involved in cars since a young age as well. He would get behind the wheel of a go-kart at the age of six, and hasn’t looked back since.

“Most memorable moment in racing was definitely winning the 2009 Ontario Grand National Bear Hunt in Shannonville,” he said. “Dad and I have been racing since I was six in karts and we toured a lot in my last few years but when I was young in 2009 to win an Ontario National title, that was huge.”