The domination continues for Daniel Hawn as he picked up his ninth straight OSCAAR Pro Sprint feature victory on Saturday night at Peterborough Speedway. 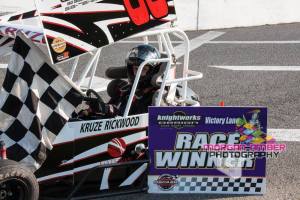 Jaden Riddel won the third heat ahead of Hawn, James Stanley and Summers. Unfortunately, it was Anthony and Triska running into problems this time around.

Brody Rickwood went for the daily double ahead of Cullen, Taylor, Heatherton, and Bowman. Battilana and Shawn Stanley failed to start this time around.

With Tyler Cullen and Kevin Taylor leading the field to green, everybody managed to run cleanly from the drop of the green flag to the checkered, with the race only being slowed once in the early stages due to mechanical issue. Although Brody Rickwood paced the opening laps, Daniel Hawn would use the restart to his advantage, taking the lead and cruising to victory.

James Stanley finished second for a season-best finish, followed by Tyler Cullen with his second straight third-place finish. Ryan Battilana overcame his issues to place fourth to tie his best-career OSCAAR placement, with Rob Summers rounding out the top-five with a season-best fifth.

Kevin Taylor finished sixth for his fourth straight top-eight finish, followed by Gary Triska with a season-best seventh. Brody Rickwood placed eighth for his first top-10 of 2018, followed by Bill Heatherton in ninth in his first appearance of 2018. Jaden Riddel rounded out the top-10, which oddly enough is the worst finish of his rookie campaign so far.