Despite craziness throughout the entire weekend, a familiar face was in victory lane when everything was complete as Gary McLean won the Autumn Colours Classic OSCAAR Modified feature on Sunday at Peterborough Speedway. Meanwhile, a podium finish was enough for Luke Gignac to be crowned series champion.

The heats did not start off cleanly, with John Harper going around on the opening lap. Then while battling for the lead, contact between Chris Milwain and Andy Jankowaik saw Jankowaik go over the front end of Milwain in turns three and four. Brad Stevenson picked up the win ahead of A.J. Emms, Cliff Hodgkinson, Harper, Randy Hollingsworth, Milwain, and Jankowaik.

The start of the third heat didn’t go well with Jase Cornell getting sideways, resulting in Luke Gignac going for a slide through the frontstretch grass. J.R. Fitzpatrick picked up the win ahead of Gignac, Gary Elliott, Connor James, Mike Hearty, Adam Cuthbertson, and Wally Wilson.

The race would not start off cleanly as Aaron McLean went for the spin down the frontstretch on the opening lap. Then on Lap 2, there’d be a pile-up in turn two involving Fitzpatrick, James, Tolton, Hodgkinson, Reinhart, and Hollingsworth.

The third attempt to start the race went cleanly with Gignac leading Harper as Emms ran third ahead of Horner, Stevenson, Gary McLean, Baker Jr., Hearty, Tolton, Robinson Jr., Milwain and Elliott. The third caution came out on Lap 6 for McFadden spinning in turn three and four, with Horner heading down pit road under yellow.

The fourth attempt went cleanly with Gignac and Emms side-by-side for the lead. Gignac got the top spot on Lap 11 ahead of Emms as Gary McLean moved into third. McLean would then get by Emms for second a lap later, with the seventh caution coming out on Lap 16 for Tolton going around. With 35 laps to go, Gignac led McLean, Emms, Hearty, Elliott, Baker Jr., Robinson Jr., Aaron McLean, Horner, Warnes, Hollingsworth, Hodgkinson, Milwain, James, and Wilson. 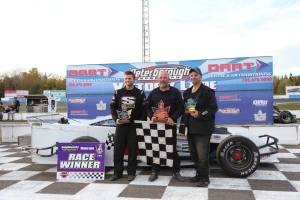 Gary McLean got a good restart to take the lead ahead of Gignac and Emms, with Horner moving up into fourth ahead of Elliott, Robinson Jr., Hearty, Hodgkinson, and Milwain. Milwain then got alongside Hodgkinson for seventh, completing the pass on Lap 21. Behind them, Baker Jr. challenged Warnes for ninth, but that did not go well with Warnes going around for the eighth caution at Lap 23.

The first attempt at a restart did not go as planned, with Milwain and Robinson Jr. making contact, causing both drivers to climb the backstretch wall off of turn two. The decision would be made by race control to revert to single-file restarts, while counting caution laps from here on out.

The second attempt went cleanly as the restart came on Lap 26 with Gary McLean leading Gignac, Emms, Elliott, Horner, Baker Jr., Warnes, and Hearty. Emms would then get alongside Gignac for second, but the caution came out on Lap 30 for Elliott spinning in turn two. With 20 laps to go, McLean led Gignac, Emms, Horner, Baker Jr., Hearty, Tolton, Hodgkinson, Warnes, James, Wilson, McFadden, and Elliott.

The restart came at Lap 35 with McLean getting the jump as Emms moved into second ahead of Gignac, Elliott and Baker Jr., with Horner and Hearty side-by-side for sixth. Horner got the spot with 11 laps to go ahead of Hearty, Tolton, Warnes, James, McFadden, Hodgkinson, and Wilson.