After all the chaos was settled, Richard Woodland found his way to the front and victory in the Outlaw Midget feature at Sunset Speedway. 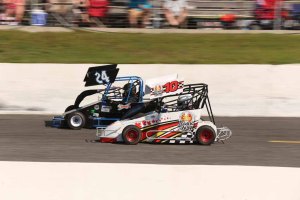 The cautions came early, with the first one flying on Lap 1 for the 17 stopping in turn four. The restart brought forth a second with an incident in turn three involving Nigel Buttivant, Draganac, and Brown.

The third attempt to start the event went cleanly with Adam Tyo grabbing the early advantage ahead of Van Dusen, Richard Woodland, and James. James would make her way up to second on Lap 3 with a three-wide pass on Woodland as they went by the lapped car of Wagner. She then got alongside Tyo for the lead on Lap 4, completing the pass a lap later. Bound was also able to get through traffic quickly, moving into second on Lap 6.

Behind them, Richard Woodland ran third ahead of Tyo, with Carrothers passing Tyo on Lap 7. McLean had made his way up to sixth ahead of McCall, Lawson, and Van Dusen. McLean continued moving forward, passing Tyo for fifth on Lap 9, with McCall following him through two laps later. Lawson continued to run eighth ahead of Van Dusen, Brian Woodland, and Farrell. 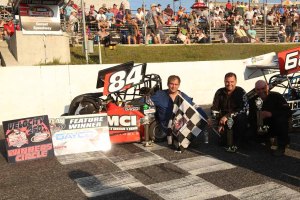 The battle at the front caught everyone’s attention on Lap 13 with Bound and James running side-by-side ahead of Richard Woodland and Carrothers. The pair remained side-by-side as other battles took place throughout the field, including Brian Woodland and Van Dusen on Lap 15 for ninth.

The battle for those spots just outside of the top-five got a little hairy as contact happened, creating the big one as Van Dusen Jr. cart-wheeled while Farrell flipped. The accident happened as the leaders were coming to lap them, causing both of the top-two cars to become involved. In all, the following drivers had damage – Buttivant, Lassman, Bradley, McKibbon, Van Dusen Jr., James, Brian Woodland, Farrell, Wakeling.

So with about six laps to go, Richard Woodland led Carrothers, McLean, McCall, Tyo, Lawson, Rodgers, Bradley, Buttivant, and Lassman. Before the race went back to green, but McLean and McCall pulled off the track.

Richard Woodland got a good restart, leading the rest of the way en route to scoring the victory ahead of Adam Carrothers, Larry Lawson, James Rodgers, Adam Tyo, Mike Bradley, and Steve Lassman.