Twenty six Pro Late Models were on hand and with the warm weather, the track record of 15.164 was sure to be challenged. When all was said and done, the record was eclipsed, not once but 12 times. Brandon Watson would sit on the pole with a time of 14.965 becoming the first APC Late Model in the series history to set a lap under 15 seconds at any track.

After time trials we moved right into the feature races for the remainder of the series at the track. The Pure Stocks were up first with Ross Winters Jr. and Jeffrey Allen on the pole. An exciting race with Winters leading flag to flag and he managed to hold off a hard charging Doug Moir to pick up the win. Moir actually finished second but was penalized to sixth place behind the 32 car of Gillian Hils who he got into out of turn four half way through the race. Top three were Winters Jr., Courtney Scott and Andy Wheller.

The Klotz Auto Repair and Engine Machine Shop Mini Stocks were next Jake Watson and Russ Aicken sat on the pole and the two would battle throughout. Aicken led lap one. A caution on lap three as the 61 of Allie Ditner was leaking fuel. As the race wore on Aicken led with Watson right there on his bumper. He made several attempts to get by with out success. The 03 of Jake Gilbert was around in turns 1-2 bringing out a caution on lap 18 and a green-white-checker finish. Aicken continued to be the class of the field for this race as he held off Watson and Samantha Shaw who also raced a great race. Fresh off a feature win at Sunset Speedway last Saturday, Shaw ran a great race coming home in third place.

The Lucas Oil Canadian Vintage Modifieds were next with Patrick Reulens and Mike Podd on the pole. T.J. Marshall started third and was the leader on lap one. A caution when the 18 of Jason Keen and 00 Ron Easton were around in two bringing out a caution. The 12 of Darren Dryden was shown to the rear of the field for spinning the 00. As the race continued the 15 of Marshall continued to lead and would dominate coming home first.

Intermission followed and the normal short break was longer due to the large crowd hitting the concessions. As racing continued the Pure Stocks were up. Matt Fraser and Keara Gallant sat up front for the green. Fraser led lap one. Gallant was around in one and two but managed to get it going with out caution. Debris a few laps later however did bring out a caution. Clinton Kerkhof was the new leader and he and Doug Moir were breaking away from the field. The two battled hard and Moir finally got by to take the lead. At the finish it was Moir, Kerkhof and Winters coming home third.

Mini Stocks hit the track and Rick Robinson and Blake Wadham on the pole. Wadham led lap one. Jake Gilbert took the lead through 1-2 on lap four. A caution on lap seven as Russ Aicken spun out of four. Gilbert continued to lead followed by Jake Watson, Shawn Taylor and Samantha Shaw.

The Canadian Vintage Modifieds were next with Darren Dryden and Daryl Henwood on the pole. Dryden led lap one and Henwood was first the next time by. Jason Keen got by Dryden for second place on the back stretch on lap seven. Henwood continued to lead and came across the line first followed by Keen and Dryden. 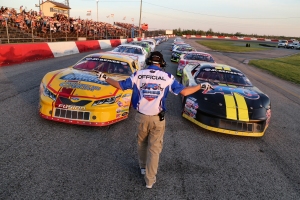 The last race of the night was the APC Meineke 100 Pro Late Model race and all 26 cars lined up on the front stretch for driver introductions. The crowd counted down for the start of the engines and the greatest sound is the roar of 26 Pro Late Models starting at once. The top five qualifiers after time trials were Brandon Watson, Andrew Gressel, Matt Lockwood, Josh Stade and J.R. Fitpatrick. As the green flag flew Lockwood and Stade led the field to green. Lockwood led the first lap and would continue as the race wore on. By lap 15, the field started to come into lapped traffic.On lap 21, Shawn Chenoweth started to show some tire smoke and would retire to the pits of lap 27 with a broken sway bar ending his night. On the restart, Lockwood seemed to slow a bit through 3-4 and that allowed Andrew Gressel to get by to take the lead followed by Brandon Watson. A battle between two of the fan favorites, J.R. Fitzpatrick and Shawn McGlynn as the two race side by side for several laps around lap 40. Fitzpatrick started to slow and he started to fall back and soon was seventh. Gressel and Watson continued a fight up front and ran bumper to bumper. A few cautions soon after as Gary Elliott spun to the infield on lap 47. The front runners continued to battle and were breaking away from the rest of the field. On lap 70, Watson made his move and through 1-2 Watson got by Gressel to take the lead. The final cautions of the race came on lap 72 and 74. On the restart Watson continued to hold a slim lead over Gressel and the 81 made several unsuccessful attempts to get past. Shawn McGlynn “muscled” his way past Lockwood for fifth with five laps to go. As starter Dale Shunamon waved the twin checkers it was Brandon Watson coming across the line first followed by Gressel, Billy Schwartzenberg, Shae Gemmell and Shawn McGlynn. A very exciting race to say the least. Race three in the series is next weekend at Peterborough Speedway. Make plans to join us Saturday July 15th for the next APC race when the London Recreational 100 hits the track.

That brought to a close a very exciting night of racing. Next week is Meet the Drivers Night. All the cars and drivers will be out on the front straight to meet and greet the fans with autographs and treats for the kids. The Grisdale Pro Late Models are on hand with the Ray’s Auto Centre & Towing Super Stocks, the Klotz Auto Repair and Engine Machine Shop Mini Stocks, the Pure Stocks, the Pro Four Modifieds and the Lucas Oil Can Am Midgets. Pits open at 4pm, Grandstands at 5pm and racing gets underway at 630pm. Check the website, http://www.flamborospeedway.ca for all the details.

Thanks to Derek Smith of http://www.racepulse.com for the great photos. 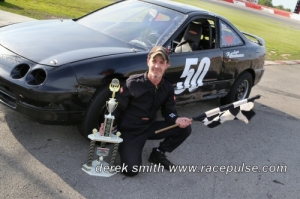