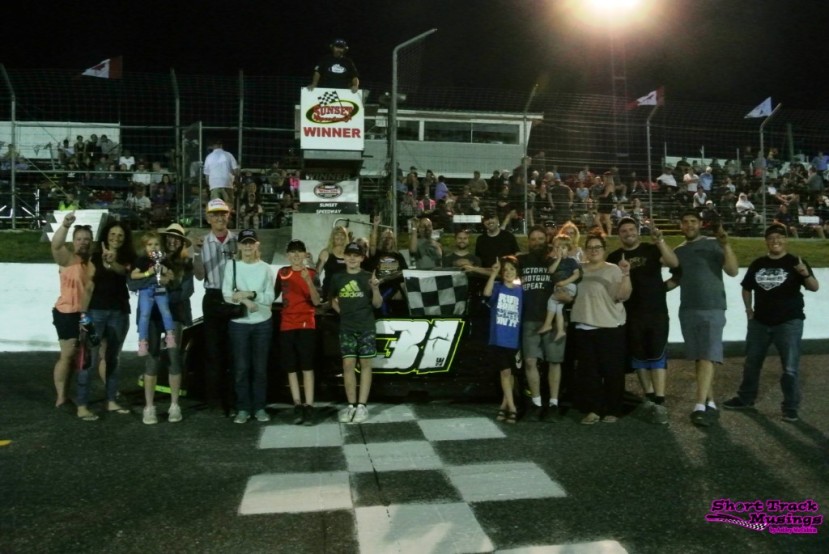 INNISFIL, Ontario — Making a surprise return to the Super Stock division, Rick Spencer-Walt proved he has not lost his touch, driving through the field to score the feature victory on Saturday night at Sunset Speedway.

Meanwhile, the division championship came down to a matter of a tie-breaker and a single point between a trio of competitors, with Gerrit Tiemersma being crowned the 2022 Super Stock Champion over Johnny Morrison and Cory McAllister. 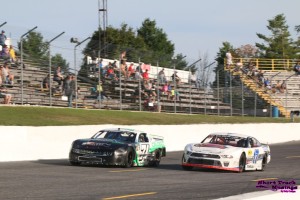 Paul Pepper won the first heat in front of Matt McGrath, Miles Tyson, Connor Maltese, Cory McAllister, and Gerrit Tiemersma. There was some contact courtesy of McAllister and Tiemersma.

Rick Spencer-Walt was victorious in the second qualifier ahead of Johnny Morrison, Dan Archibald, Brandon McFerran, Tyler Hawn, and Nick Tooley. This also had some bumps, thanks to Archibald and Spencer-Walt.

Tyler Hawn was victorious in the fourth qualifier ahead of Spencer-Walt, Morrison, Tooley, Archibald, and McFerran.

The drop of the green saw Paul Pepper and Matt McGrath battle for the lead, as Tiemersma and McAllister ran side-by-side for third in front of Morrison. Behind them, Hawn and Archibald battled for sixth, with Hawn getting the spot on Lap 3, as Tyson looked to follow him through, with Spencer-Walt up to ninth in front of McFerran. McFerran challenged Spencer-Walt for ninth on Lap 5, though was unable to get by as Tyson cleared Archibald, with Spencer-Walt looking to follow through.

Paul Pepper secured the lead on Lap 8, with Tiemersma moving into second, as McAllister got third a lap later in front of Morrison, with Hawn next in line to challenge McGrath. Pepper’s reign at the front did not last long, with Gerrit Tiemersma getting alongside on Lap 11, and taking the top spot a lap later.

McAllister continued to run third in front of Morrison, Spencer-Walt, Hawn, Tyson, McGrath, and Archibald. Archibald would then challenge McGrath for eighth as Tooley rounded out the top-10. Archibald’s challenge did not work out well, as he’d go around in turn two for the caution at Lap 16. At the halfway mark, Tiemersma led Pepper, McAllister, Morrison, Spencer-Walt, Hawn, Tyson, McGrath, Tooley, McFerran, Archibald, and Maltese.

Tiemersma got a good restart to maintain his advantage, with Pepper and McAllister side-by-side for second, as Spencer-Walt battled Morrison for fourth. McAllister got the spot in front of Spencer-Walt, with the caution coming out a lap later on Lap 18 for Tyson spinning Pepper in turns one and two. With 13 laps to go, Tiemersma led McAllister, Spencer-Walt, Morrison, Tooley, Hawn, McFerran, Archibald, McGrath, Maltese, Pepper, and Tyson.

The next two attempts at the restart did not go over well, courtesy of Tiemersma and McAllister not timing it right together at the front of the field.

The third attempt saw Tiemersma come out with the advantage, throwing a block on Spencer-Walt as he challenged for the top spot. He was not denied, though, as Rick Spencer-Walt took the lead on Lap 21 ahead of Tiemersma, with the yellow flag waving a lap later for Archibald going around in turn four. With 10 laps to go, Spencer-Walt led in front of Tiemersma, McAllister, Morrison, Tooley, Hawn, McFerran, Maltese, Pepper, Archibald, and McGrath.

Spencer-Walt got a good restart in front of Tiemersma and Morrison, as Hawn and McAllister battled for fourth, with Tooley and McFerran side-by-side for sixth. McAllister got the spot on Lap 26 ahead of Tooley, Hawn and McFerran, with Maltese challenging McFerran for seventh a lap later.

With how close the points were, Tiemersma and Morrison tied for the top spot, a single point ahead of McAllister. The tie breaker would go to most wins on the season, with Gerrit Tiemersma being crowned the 2022 Super Stock Sunset Speedway Champion.