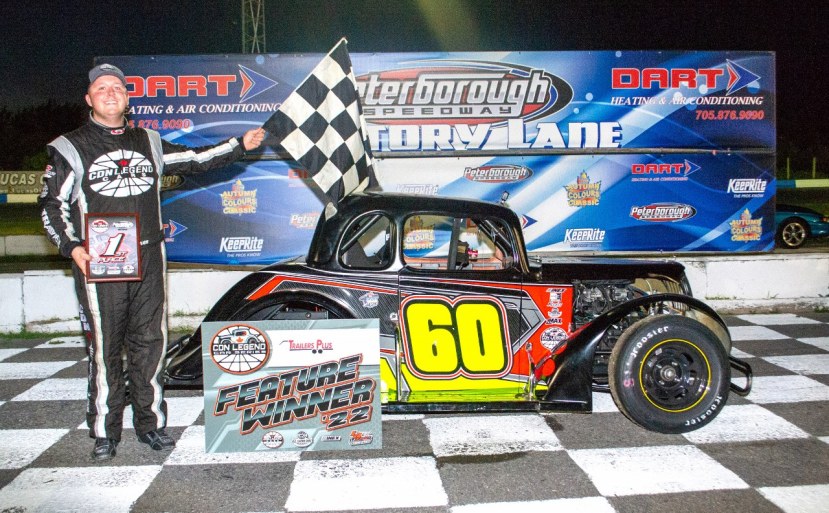 It was a new verse to a familiar song as Parker Traves scored the Trailers Plus Canadian Legend Car Series main event win – Saturday, August 6th – at Peterborough Speedway.

Taking the initial green flag from the outside of the 2nd row, Traves chased Wes Cuthbertson and Zach Latimer through the early stages of the 25-lap headliner as Dawson Drimmie, Matt Haufe and Adam Cuthbertson worked their way into the top 5 with just over a handful of laps showing on the scoreboard.

The leaders began working through slower cars at the tail of the field with 8 laps complete, with the night’s first yellow flag slowing the pace for an issue on the front stretch as the lap counter showed 10 circuits complete.

Adam Cuthbertson – a former series champion – took full advantage of the tour’s choose rule and lined-up alongside his brother for the restart. With Wes Cuthbertson doing his best to hold-off his sibling, another caution flag, with 19 laps down – this time for debris on the backstretch – brought the pack back together.

Parker Traves took over the runner-up spot on the restart and moved into a lead he wouldn’t surrender with only 3 laps remaining to take his 5th win of the year. Wes Cuthbertson, Matt Haufe, Adam Cuthbertson and Dawson Drimmie completed the top 5. Jordan Latimer, Zach Latimer, Glenn Morris, Sean Walker, Jeff McKibbon and Mark Griffin rounded-out the finishing order.

Trailers Plus Canadian Legend Car Series qualifying events were won by Zach Latimer with a pair. The others went to Adam Cuthbertson and Dawson Drimmie.

Canadian Legend Car Series notebook: It was a rough night for a trio of tour regulars. An issue during the show’s first qualifying heat saw the No. 08 machine of Steve Gareau tumble down the backstretch. The driver was uninjured when checked by track personnel but his night was over, as it was for the No. 33 of Paul Pierik…After being involved in an incident Saturday, July 9th – the last time the tour visited Peterborough Speedway – 15-year-old rookie Cameron Townson was anxious to get back to the track. With the help of several friends, family members and crew from other teams, including Super Stock racer Brad Stevenson the No. 24 ride made it to the speedway. Unfortunately, mechanical issues kept the young car owner/driver from taking the feature race green flag.

For additional details on the 2022 Canadian Legend Car Series schedule or to obtain parts, service, set-up chassis and engine repair as well as technical support, head to http://www.facebook.com/canadianlegendcars, http://www.cdnlegendcars.ca or message canadianlegendcars@gmail.com.