KEEPING UP WITH…… Jr Late Models 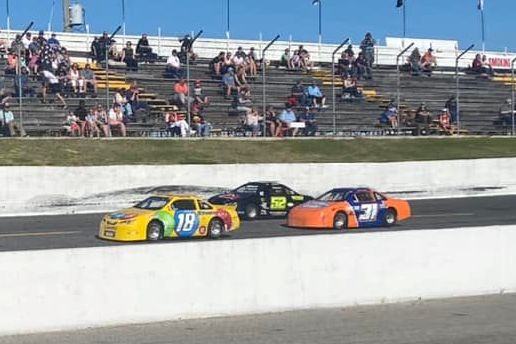 With four different tracks running Jr Late Models across the province, there is lots of opportunity for the young guns to continue to shine.

Ryder White continues to ultimately lead the way, capturing more checkered flags with a pair of victories at Full Throttle Motor Speedway on June 18, followed by wins at Sauble Speedway on June 25 and July 2. If you ignore the 10th-place finish on July 3 at the beach, he has seven wins across eight races this year. How do you stop the No. 88?

Following his victory at FTMS, Brandon Magee has carried the momentum forward as he picked up the checkered flag at Sauble Speedway on July 3. Combined with a pair of podiums in the other two events at Sauble, he’s certainly made the most of the past couple weeks, and has scored just one finish outside of the top-five in nine races for 2022. 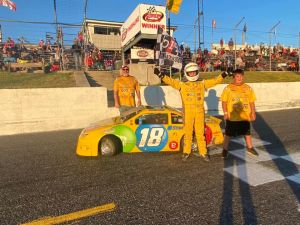 After posting a pair of runner-ups, Oliver Ferguson got the chance to celebrate his success last weekend at Sunset Speedway with a trip to victory lane.

Laila Walser is still as fast as she has been, scoring a runner-up at Full Throttle Motor Speedway and Sauble Speedway over the past couple weeks. Through eight races to date this season, she has no finishes worse than eighth with six top-five’s. It’s only a matter of time until she repeats the checkered flags of 2021.

Jake Spencer-Walt has continued to get faster, and predictions of checkered flags in the future proved to be true as he won both qualifying heats last Saturday at Sunset Speedway. With three consecutive top-five finishes, he is easily predicted to be the next first-time victor.

Consistency seems to be the name of the game for Del Freiburger, as he has scored four straight finishes of second or better, including a pair of wins. Combined with a pair of top-five’s at FTMS earlier in 2022, you could easily see why he’s one of those everyone is watching.

Kara Martin and Will Quarrie continue to split the checkered flags at Grand Bend Speedway, as Martin picked up another two with Quarrie snagging the other. It is worth noting that Quarrie has only two starts, two checkered flags for 2022. Martin, meanwhile, has finished no worse than second in seven races.

That said, they are still being kept on their toes by their competition as Grayson Masson has four podiums including a pair of runner-ups, and a fifth to his record for 2022. There’s also Judah Buesink, who has scored a pair of fourths and a third. Alyssa Burnett is also inserting herself in the conversation, with a pair of top-five’s including a runner-up in the last three events.

Keegan Moat is putting together an argument of being the Most Improved Driver at Sunset Speedway, scoring a career-best second on July 2. Wyatt Sprung could be someone to watch as he has three straight top-10 finishes, including a third at FTMS on June 18.

We’d be doing a disserve is we ignored Peterborough Speedway’s introduction to the division, which saw Lucas Finnegan score the victory on July 2 in front of Chase Stevenson, Kaiden Beatty, and Lyla Sikma.