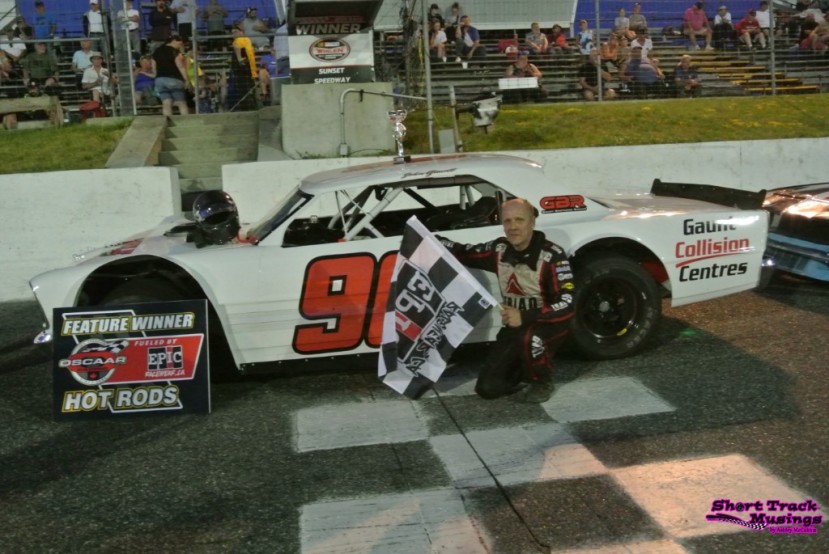 Bill Zardo was victorious in the fifth qualifier in front of Clarke, Senior, Gaunt, Broom, Walker, and Bos.

The sixth heat featured a quick yellow flag, with Beatty spinning Adams in turn one and two, after Adams cut across Beatty’s nose on the front stretch. Steve Book was your winner ahead of Bromley, Morris, Fetterly, Taggart, Cowan, Adams, and Parsons.

Paul Senior grabbed the initial advantage off the drop of the green flag ahead of Zardo, with Balson and Clarke side-by-side for third. Bill Zardo then got alongside Senior for the lead, taking the advantage on Lap 3 as Balson moved into third in front of Book, Walters, and Clarke. Book then got alongside Balson for third on Lap 5, though was unable to take the spot. Instead, Walters utilized the opportunity to get alongside Book for fourth, as Clarke ran sixth with Bromley and Gaunt side-by-side for seventh.

Walters took the spot, getting alongside Balson for third on Lap 9. Walters then took over the spot a lap later, as Book ran fifth in front of Gaunt, Clarke and Bromley, with Foster and Beatty side-by-side for ninth. Gaunt then got alongside Book for fifth on Lap 13, with Senior back alongside Zardo for the top spot a lap later.

With 15 laps on the board, Zardo held serve at the front of the field with Walters alongside Senior for second. Walters took the spot a lap later, with Balson looking to follow through. There would be contact, resulting in Senior going for the spin and a yellow flag at Lap 17. With 13 laps to go, Zardo led Walters, Gaunt, Book, Clarke, Bromley, Beatty, Foster, Fetterly, Kellar, and Broom.

The restart would see Tom Walters scrap away for the lead, followed by contact in Zardo and Book’s battle for second. Zardo would get loose off of turn four, sliding up into Book, resulting in Book getting into the outside frontstretch wall and a second yellow flag. Behind them, Bos and Mayhew got stuck together as they came to a stop avoiding the incident. With 12 laps to go, Walters led Gaunt, Clarke, Bromley, Beatty, Foster, Keller, Fetterly, McLean, and Broom.

John Gaunt grabbed the advantage on the restart with Clarke alongside Walters for second. Walters continued to fall back, heading pit side on Lap 22 with mechanical issues. This allowed Bromley to move into third in front of Beatty, Fetterly, Senior, Foster, McLean, Balson, Broom, Zardo, Morris, and Hannah. Zardo then got alongside Broom on Lap 25 for 10th, looking to rebound from the earlier incident.

John Gaunt led the rest of the way en route to scoring the victory in front of Nick Clarke, Rob Bromley, Donny Beatty, and Amanda Balson.

The Qwick Wick Fire Starter OSCAAR Hot Rods will be back in action on Friday, July 1 and Saturday, July 2 at Delaware Speedway as part of the OSCAAR Nationals weekend.