Keeping an Eye On…… Mini Stocks 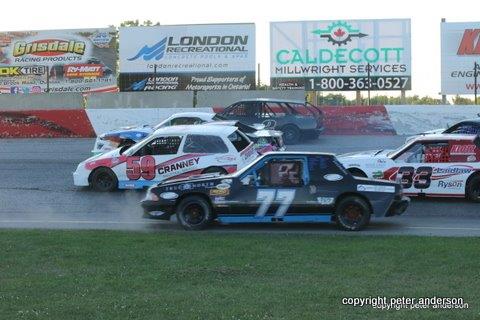 Each week, this will be the column that takes a look at a division’s past weekend of racing, combined with the week ahead to highlight what should be on the minds of all race fans.

It’s a busy time for the drivers out at Flamboro Speedway, as they’re set to embark on their third consecutive weekend in a row of racing. After a rough feature on Saturday, it is safe to say everyone just wants both of those to go smoothly this time around. It is never fun watching cars get wrecked, and four different competitors experienced that.

Bobby Mercer‘s strong start has hit a big of a snag, as the pair of finishes outside of victory lane were just the beginning. He blew a motor on June 11, and was one of those caught up in a wreck on June 18 as he tried to weave through lap traffic. Still, you cannot take anything away from his impressive campaign of 11 podiums in 13 races this season.

Once Shawn Taylor reached victory lane, it seems the gate is wide open as he was able to add another trophy to the collection on June 18. Unfortunately, he was involved in the same incident as Mercer in the second feature that night so it has hurt the overall streak of finishes. But picking up three top-four finishes in the last four races is nothing to hold your head about.

Remember how we spoke about Cole Quinton‘s consistency two weeks ago? You should have been listening, as the No. 18 Mustang was able to park in victory lane on June 11 following perhaps the closest finish of the season as he dueled Taylor right to the checkered flag. We’ll just repeat what we said before for good measure – eight races this season across two different tracks (Sunset Speedway and Flamboro), with just one result worse than fourth, and that was a fifth.

Mike Thomson is still our dark horse by the way, as he has scored four top-five’s across the last five races.

When it comes to Flamboro Speedway, we always say do not count out Karl Sault if he’s in attendance. Those on June 18 will remember that, as evident by a victory and third to kick off his 2022 campaign.

Scott Schlueter was on our predictions of drivers to win in the future – and bam, mark that down as being correct as he was able to get it done on June 18. That now gives him a win, a pair of runner-ups, and a fourth in his last four races. Not too shabby at all.

Issac Dippel was the other winner on June 18, to nobody’s surprise in being a past front runner at the facility over the past several years. This may be the trend of something to continue for the rest of 2022.

Thomas Wunsch continues to be the man that everyone is looking towards, though, as he added a runner-up and a third to go with his pair of trips to victory lane. Combined with Mitch Wilkin scoring just two finishes worse than third this year, and the championship fight may as well go down to the last event of 2022.

So whose the next guy to be keeping an eye on? Matt Clarke after scoring a runner-up in the second feature on June 18.

The division may be off this week, but we were right about our prediction that seeing Matt Boyes out front is no surprise to anyone. It’s why it was a sight repeated on Saturday night, giving him three straight to go with the DNF. The only thing is one bad night can set you back in points, as he currently sits eighth, 69 out of the lead. Lots of time to make-up ground, but certainly a steep hole right now.

Cameron McGlashan was also fast again, as predicted, as that’s why he’s your current points leader. A third-place finish on Saturday gives him three of those now in a row. Perhaps the break is what he needs to find the necessary difference.

As for someone else to watch? Chandler Bos came on strong this past Saturday, putting up lap times right there with the front runners, a heat win, and a runner-up in the feature. He has yet to score his first career win, but it may be right around the corner.

Consistency is the name of the game, just ask Jason D’Antimo and Eric Rainey. They’ve ran each night thus far, avoided the various wrecks that have occurred (mostly) and now find themselves ranked top-five in points. If you want an underdog, here are two names for you.