LONDON, Ontario — From mechanical woes, to being passed in the closing laps, or running out of time in a drive through the field to catch the leaders. Treyten Lapcevich has experienced the many different ways to lose an APC Auto Parts United Late Model Series event.

Though on Saturday night, he did not have to relive those moments all over again. Instead, he got to raise his arms high up in victory lane and wave the checkered flag as the winner.

“It’s super exciting,” he told SHORT TRACK MUSINGS. “I’ve been waiting for this one for a long time. We’ve been second quite a few times in this series so to finally get the win, it feels great. I could’ve never really thought it would’ve come at Delaware to be honest with you, but I’ve become very familiar with Delaware recently and am starting to enjoy it.” 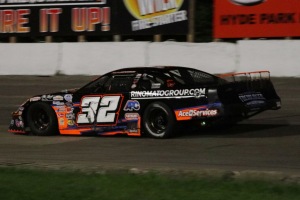 Crediting Wight Motorsports Inc. for a great car all day, Lapcevich started off the afternoon by posting the second quickest lap in practice, before posting a new track record in time trials. He wasted no time taking the lead on the start of the event, pacing the field with just six laps on the board.

He’d fall back to second at Lap 60, but did not give up as he and then leader Shae Gemmell weaved their way through lap traffic. When the No. 3 car bobbled going into the corner due to a tire going down, Lapcevich took advantage and taking the top spot back to pace the final 13 laps of the event.

“I messed up a little – the car got loose a little and the 3 just got around me, but I drove the wheels off of it,” he said. “I was on the edge on it every lap trying to get back to him and he slipped up a little, and I took advantage of it, and we got the win.”

As mentioned, the victory marks no surprise as Lapcevich has been a contender to win all season long, showing speed in all eight races on the schedule.

“We’ve had a fast car pretty much every race this year, but it’s pretty much been mechanical problem one after another and stuff that you could’ve never really expected to happen and of course, it happened,” he commented. “Finally, the cards finally fell into place tonight. A lot of good preparation went into this. It was at the WMI shop on Thursday night and they found a lot of speed in it there, and I’m sure that defiantly contributed to this great performance.”

As a result of five top-five’s and seven top-10’s, Lapcevich finished the year second in the standings, just one marker behind Brandon Watson for the championship. 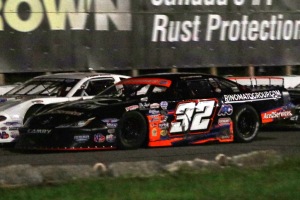 “It was a pretty good season,” Lapcevich admitted. “With all the bad luck we had and DNFS and finishing 20 laps down in multiple races and to come up one point shy of the championship, it feels good – but of course it has to be one point and that probably is what feels the worse in being just that one point. It’s really what could’ve been, but to end it off on a high note with a win feels great.”

Going into next season, he feels they should be stronger now having worked out the bugs of the new car with WMI.

“We figured out stuff that we probably never would’ve looked for going into a race,” he explained. “We’ve had problems with lower control arms breaking, welds breaking – it’s just those new car bugs and I think going into next year, probably a little bit better preparation to look for stuff that we can control.

“But like I said, a lot of stuff was out of our hands this year and just a lot of bad luck really. Hopefully things will fall into place next season and we can come out the champion.”