LONDON, Ontario — Making their first modified starts at Delaware Speedway, Coltin Everingham and Wally Wilson battled the learning curve en route to the team being able to leave the track with a top-10 finish.

Wally Wilson began the day with a ninth in his qualifying heat, with Everingham placing seventh in his. 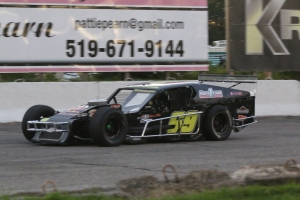 The pair would start deep in the field for the feature, as they watched chaos erupt ahead of them on the opening lap with the front row starters getting together off of turn two. The pair were able to avoid the accident, as well as a spin two laps later by a fellow competitor.

Up to the 11th position following the incident, Everingham got a good restart, allowing himself to break into the top-10. He continued to battle  hard through the remaining 37 laps en route to placing 10th.

Wilson would gain experience with each lap around the speedway, using the lessons learned to gain speed en route to a 17th-place finish.

Everingham and Wilson will be back behind the wheel for the next Queenston Chevrolet Buick GMC OSCAAR Modifieds presented by Just Foam It race at Flamboro Speedway on October 2. Everingham is also set to partake in the Grisdale Triple Crown Pro Late Model race the next day at Flamboro, as well.

Wally Wilson Racing is proud to have support from The Fyre Place & Patio Shop, Have1.com, Mister Transmission in Owen Sound, and Napoleon.

Keep up with Wally Wilson Racing by liking the facebook page at https://www.facebook.com/Wally-Wilson-Racing-443805665798939/?fref=ts