INNISFIL, Ontario — Battling side-by-side through the late stages, Lane Zardo would edge out Dwayne Baker for the victory.

Dennis Cybalski would grab the early advantage with Troback and Vanderwyst battling side-by-side for second. Zardo would try to go three-wide inside, resulting in contact cutting Vanderwyst’s tire, and the caution coming out on Lap 2.

Cybalski and Troback would battle for the lead on the restart, with Zardo moving into third as Pepper and Tiemersma ran side-by-side for fourth. Baker ran sixth in front of Constable and Boundy, with the caution coming out on Lap 6 for an incident involving Weeda and Wilkie.

Cybalski would get a good restart, but the advantage would not last with Lane Zardo grabbing the top spot a lap later. Baker would move up into third in front of Tiemersma and Troback’s battle for fourth, as Pepper and Constable ran side-by-side for sixth. Behind them, Boundy held down eighth as Ramsay and Parker battled for ninth, with Ramsay taking the spot on Lap 10.

The green flag would not last, with Tiemersma spun off the bumper off of Pepper, collecting Nagy, Owen, and Parker with them. With 38 laps to go, Zardo led Cybalski, Baker, Troback, Constable, Boundy, Ramsay, Collison, Davenport, Davey, McFerran, Owen, and Moneau Jr.

Zardo would get a good restart, while unfortunately, Boundy headed down pit road with an issue. Baker moved into second in front of Cybalski, Troback, Constable, and Ramsay, with Collison and Davenport side-by-side for seventh in front of Davey. Davenport would get into Ramsay on Lap 17, which would allow Collison to move up into seventh, with Davenport clearing Ramsay a couple laps later.

Behind them, McFerran and Davey ran side-by-side for 10th, with McFerran taking the spot later, as Vanderwyst looked to follow him through. Vanderwyst would give Davey a shove, allowing him to snag the spot, as McFerran got alongside Ramsay for ninth. Their battle was short lived, with the caution coming out on Lap 23 for McAllister having a flat tire in turn four.

The restart would produce the fifth yellow flag, as Davey would get up on McFerran’s car, cutting Davey’s tire.

The second attempt would see a battle between Zardo and Baker, as Cybalski and Troback ran side-by-side for third. Zardo would clear Baker for the lead on Lap 25, with Constable in fifth in front of Collison and Davenport.

Further up the field, Davenport challenged Constable for fifth on Lap 37, with Tiemersma officially taking seventh in front of Collison, Vanderwyst, and McFerran.

The green flag run would come to a close on Lap 39 with the sixth caution for Vanderwyst around on the frontstretch off of McFerran. With 12 laps to go, Zardo led Baker, Troback, Cybalski, Davenport, Constable, Collison, Ramsay, Pepper, Moneau, and Morrison.

Zardo would get a good restart in front of Baker, as Davenport and Constable battled for fifth, with Tiemersma and Collison side-by-side behind them. The green flag did not last, with the seventh caution on Lap 41 for Morrison going around in turns one and two. 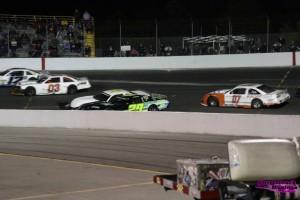 The restart would see Constable get by Cybalski for fourth, with Cybalski going around off of Davenport’s bumper for the eighth caution at Lap 45, collecting Owen, McAllister, Parker, and McFerran. With six laps to go, Zardo led Baker, Troback, Constable, Collison, Tiemersma, Pepper, Moneau Jr., Ramsay, Parker, McAllister, and Davey.

Baker and Zardo would battle side-by-side for the lead, with Constable moving into third ahead of Troback. But once again, the ninth caution would fly, for McAllister going around in turn two. The 10th yellow flag then flew a lap later, for Troback cutting down across Collison’s and going around.

Lane Zardo and Dwayne Baker would battle side-by-side on the restart, with Zardo coming across the line ahead for the victory.