MILLGROVE, Ontario — After a bumpy ride a couple months ago, the APC Auto Parts United Late Model Series of Ontario returns to Flamboro Speedway for their second appearance of 2021 with the London Recreational Racing 100 on Saturday, September 4.

Coming off a victory in the Stewarts 75, Brandon Watson carries an eight-point advantage over Treyten Lapcevich into the weekend. The driver of the No. 9 has had a rocky season overall, scoring three wins to go with a pair of 11th-place finishes. Of course, he was the victor earlier this season in the Interstate Batteries 100, following a series of late-race battles against some of the best in the series.

“It’s going to be good,” he said. “We had a little luck there and other stuff going on, but our car was okay (last month). It was pretty good for most of the race, but got loose towards the end. Hopefully we got that figured out.

“It will be similar to this track. There may be some carnage again. Unfortunately, it wasn’t a good race overall with some cars getting taken out – the first race was good, but the second race got a little out of hand. Hopefully at Flamboro we can all pick it up and race together, and not draw as many cautions and wreck as many cars, because I know all these cars are really expensive. It’s just tough to come out week after week and wreck some cars. Hopefully like I said, we can tighten the car up a little bit for Flamboro.

“I know we came out of there with a win last time, but we had to work pretty hard. So hopefully we come out with another and have the car handling a little bit better.” 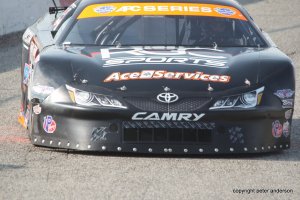 Lapcevich, meanwhile, enters the weekend with his own bit of momentum following a pair of top-five’s at Sauble Speedway. Flamboro Speedway could easily be the sight of his first career series victory, as he won a feature there previously, and made it through the chaos in July to score a third-place finish.

Pete Shepherd started off the year with a runner-up at Flamboro Speedway, and scored a third and a pair of finishes outside the top-10 to place himself third in the series standings.

The laps for Shepherd, Lapcevich, Watson, and Shae Gemmell will be crucial this weekend, as they will return to the Millgrove, Ontario facility on Sunday, September 12 for the NASCAR Pinty’s Series double header.

When it comes to Flamboro, Gemmell always has a smile on his face and understandably so, being a past Grisdale Triple Crown Champion. A solid run this weekend would go along way as he has yet to score a top-10 finish in APC competition this season.

Jake Sheridan also enters this weekend with momentum, as he won the first feature at Sauble a couple weeks ago. He also knows what it takes to run well at Flamboro Speedway, as evident in being part of the conversation for the win back in July.

Another driver looking for a strong run is Danny Benedict, as he enters the weekend following a fourth-place finish at Sauble Speedway.

“I mean, it’s no secret the first one didn’t go as exactly as it should have,” he explained. “But I think everybody got it out of their system and as long as everybody stays clean and we have a good race, it’ll be alright. The last few times we’ve been there before last time it has been okay. It just depends on how the guy’s moods are when they show up.

“I like the track. It’s a challenging track, but we always seem to run well there. We always seem to have speed there right at the bat so hopefully we can continue the trend and have another top-five.”

Fans are welcome to come out and enjoy the action as it promises to be entertaining. No tickets will be sold online, but rather available at the gate on a first come, first serve basis. The spectator gates will open at 3 pm with racing kicking off at 6 pm sharp.

Tickets will be $35 for adults at the front gate, $30 for seniors 65 and older, and $5 for children ages 6-12. You can also buy a family pass for $75.00 which includes two adults and up to four children. Please note HST is included in those prices.

This weekend’s event is part of a busy month for Flamboro Speedway, as they will also host twin 150-lap events for the NASCAR Pinty’s Series on Sunday, September 12. Once again, no tickets will be sold online, but rather available at the gate on a first come, first serve basis. The spectator gates will open at 1:30 pm, with racing kicking off at 4pm. Tickets will be $35 for adults at the front gate, $30 for seniors 65 and older, and $5 for children ages 6-12. You can also buy a family pass for $75.00 which includes two adults and up to four children. Please note HST is included in those prices.