PETERBOROUGH, Ontario — Continuing to get faster every week paid off for Parker Traves, as he was able to score the Canadian Legends Nationals victory at Peterborough Speedway. 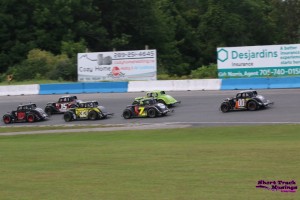 Following qualifying and their first feature on Saturday night, it’d be Parker Traves taking the early lead in the 30-lap dash on Sunday afternoon ahead of Hudson Nagy, Cole McFadden, Nick Ledson, Nick Portt, and Adam Cuthbertson, as Paul Perik and Matt Haufe battled for seventh.

Their battle was short lived, though, with the first caution coming out on Lap 3 for Shane Pollock going around in turn three with a flat tire. With 27 laps to go, Traves led Nagy, McFadden, Ledson, Portt, Cuthbertson, Perik, Haufe, Kevin Foisy, Dawson Drimmie, Cory Richardson, and Brandon Feeney.

Cole McFadden jumped into the lead initially on the restart ahead of Traves, Nagy, Ledson, Haufe, Foisy, Cuthbertson, Portt, Perik, Joe Adams, Drimmie, Richardson, and Feeney. McFadden’s advantage did not last long, though, with Parker Traves retaking the top spot on Lap 9, bringing Traves, Ledson, Haufe and Foisy through with him before the caution came out on Lap 12 for Joe Sherman driving into the turn one tractor tire.

Traves got a good restart ahead of Nagy, with Ledson and Haufe side-by-side for third. Haufe took the spot on Lap 14, with the caution flying a lap later for Portt spinning in turn four.

Traves got another good restart ahead of Nagy, Haufe and Foisy, as McFadden and Cuthbertson battled for fifth in front of Ledson. Haufe would then get alongside Nagy for second on Lap 18, completing the pass one lap later, bringing Foisy through with him. The caution then came out on Lap 21 for an incident.

Matt Haufe grabbed the initial lead ahead of Traves, Ledson, Foisy, Nagy, Cuthbertson, Adams, and Perik, with the first caution coming out on Lap 4 for an incident in turn three and four involving Drimmie, Pollock, and Portt. Following the drivers picking their restart lane, Haufe would start pole alongside Cuthbertson, followed by Traves, Perik, Ledson, McFadden, Foisy, and Inglis.

Adams continued to move forward, passing Perik for seventh on Lap 10, with Dawson Drimmie working his way back up to 12th on Lap 12 ahead of Morris and Richardson. 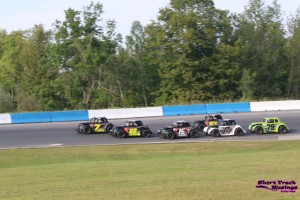 Drimmie would then get alongside Feeney, but the caution came out on Lap 14 for Emison going around on the backstretch. Following the drivers picking their restart lane, Haufe started pole once again alongside Cuthbertson, ahead of Traves, Adams, Ledson, Perik, Foisy, McFadden, Nagy, and Feeney.

Haufe got another good restart with Traves moving into second ahead of Ledson, Foisy, Adams and Nagy, with McFadden and Cuthbertson side-by-side for seventh. Cuthbetson got the spot on Lap 16 ahead of McFadden, Perik, Drimmie, Inglis, Richardson, Feeney, Morris, and Caleb Drimmie.

Traves then made his move on Lap 27, taking over the top spot, bringing Ledson through with him for second ahead of Haufe. Inglis’ strong run then came to an end three laps later, as he made his way into the pits smoking.