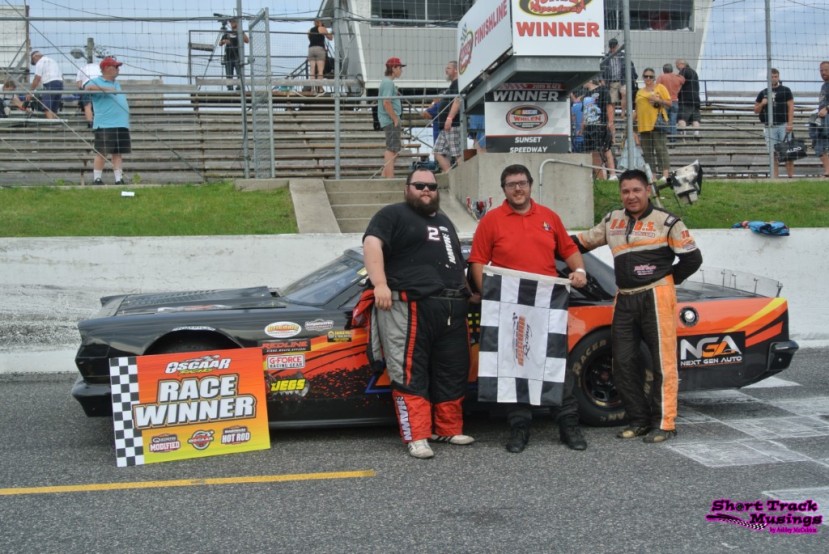 INNISFIL, Ontario — With cars going around left, right, and center, Kyle Fetterly managed to keep himself near the front of the field all day out of trouble, capitalizing when it mattered to score his first career Knightworks Design OSCAAR Hot Rod feature victory.

The third heat featured a bit of contact, with Steve Mayhew getting into Drew Robertson, collecting Dalen Martin in the midst of it. Trevor Thompson picked up the checkered flag ahead of Tyler Hawn, Jesse Kennedy, Amanda Balson, Robertson, Martin, and Mayhew.

Kennedy got third-place at Lap 6, bringing Walters through with him as Monette ran fifth ahead of Hawn, Book, Thompson, Balson, Bromley, Robertson, Taggert, and Lavalle, as Clarke and Martin battled for 14th. Clarke got the spot on Lap 10, with McLean getting alongside Martin. McLean moved into 15th a lap later, getting alongside Clarke and passing him for 14th.

Further up the field, Thompson continued his progress forward, moving into seventh on Lap 12, with Balson looking to follow him through past Book. Kennedy would move up into second, with Walters following him through as he got by Monette through traffic on Lap 13.

Kennedy wasn’t done yet, getting alongside Weber for the lead on Lap 15, and passing him a lap later, bringing Walters through with him. The caution then came out on Lap 19 for Martin spinning around in turn two.

Kennedy got a good restart at the front of the field ahead of Walters and Weber, but the green flag action did not last. The yellow flag returned on Lap 20 for Clarke going around in turns one and two.

The restart would see everything break loose, as contact between Kennedy and Walters sent Kennedy around in turn two, collecting McLean, Weber, Martin, and Book. Walters would head off-track once being given instruction to move to the tail of the field by race officials. Fetterly would inherit the lead ahead of Monette, Thompson, Balson, Book, Bromley, Robertson, Taggert, McLean, Lavalle, Clarke, Cowan, and Hannah.

The third attempt would not go any smooth, with Kennedy and Martin getting tangled up together in turn two. The fourth attempt was more of the same, with Thompson spinning Monette in turn four.

The fifth attempt went cleanly with Fetterly leading, as Bromley battled Book for second ahead of Robertson, with McLean and Hawn side-by-side for fifth. Bromley got the spot on Lap 23, with Robertson looking to follow him through. Book would go wide through turns three and four on Lap 25, allowing Hawn and Robertson to both get by, and battle side-by-side for third.

Hawn snagged the third spot on Lap 27, with Robertson going wide off of the bumper of Thompson. Hawn continued moving forward, with a pass for second on Bromley at Lap 28. Thompson ran fourth ahead of Kennedy, and Robertson, with Book now side-by-side with McLean for seventh. Book got the spot, with Taggert looking to follow him through.

As a result, Jesse Kennedy currently leads the standings by four points ahead of Tyler Hawn.

The Knightworks Design OSCAAR Hot Rods are back in action on Saturday, August 14 at Brighton Speedway.