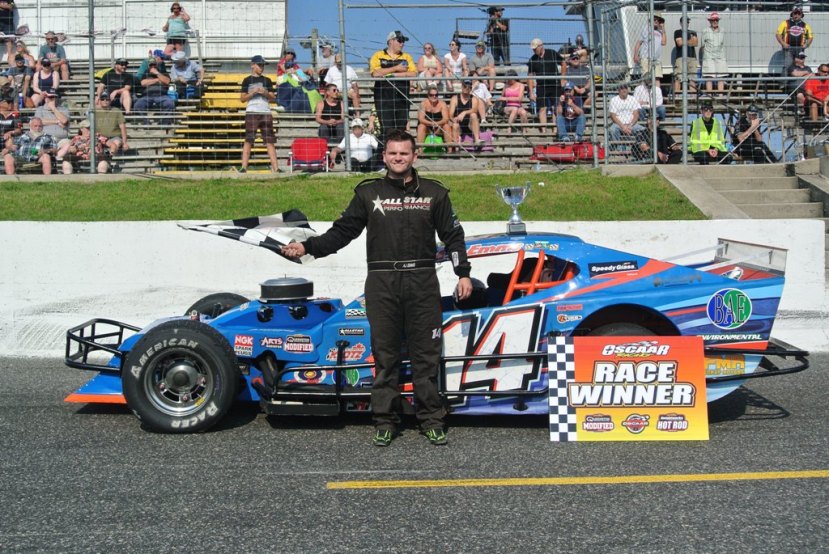 INNISFIL, Ontario — Despite starting tail of the field after missing qualifying, A.J. Emms worked his way through the field to score the victory in the Queenston Chevrolet Buick GMC OSCAAR Modifieds presented by Just Foam It feature at Sunset Speedway on Sunday.

“Almost speechless,” he said afterwards. “What a great day for our team. Big thanks to Taylor Holdaway for jumping in this morning. Obviously had prior arrangements so couldn’t be here, but Taylor and the crew did an awesome job getting the car where it needed to be.

“Really tough decision whether I was going to drive in the feature, or get Taylor into me, but the racer in me had to jump in and roll the dice. So we had start at the back there, but we were able to persevere, avoid the accidents, and be there at the end. A lot of fortunate / luck that really supported us; that definitely helped us, but we definitely had the car where we could put ourselves in position. Obviously, it was an awesome day.”

With A.J. Emms busy with post-wedding commitments after getting married on Saturday, he would miss practice and qualifying. The team made the decision to put 2015 Sunset Speedway Late Model Champion Taylor Holdaway in the car, and it paid off.

Following a pair of solid practice sessions, Holdaway won the first qualifier, followed by a runner-up in the second.

With Emms getting there in time for the feature, he would start 23rd, avoiding a couple incidents in the early laps to move up to 11th by the third lap. Restarting just outside the top-10, he would get alongside Jake Watson for ninth when the third caution came out on Lap 8.

He would continue to move forward after the restart, battling for sixth on Lap 11, getting the spot three laps later, followed by breaking into the top-five on Lap 16. The progress would continue as he moved into fourth on Lap 23, and then up another spot six laps later.

It would seem as though the climb would be complete there, with the top-two having a full straightaway advantage. However, their battle would result in contact, with one of them going around. with both drivers moved to the back of the field as involved cars, Emms would inherit the lead.

Restarting on the front row, he held off the late-race charge from series veteran Kelly Balson and rookie Steve Lyons to score the victory. It marks his seventh career OSCAAR win, and second straight at Sunset Speedway following last September.

Afterwards, Emms admitted it was a tough decision whether to get in the car, weighing the risk vs. the reward in doing so.

“You obviously start to think about getting in accidents on your way through, especially at a track like Sunset, and first time out,” he commented. “It made the decision very difficult, but at the same time, we had such a great piece today that I really wanted to drive it.”

Following the first event of the season, Emms holds a seven-point advantage over Kelly Balson in the series standings. He also leads the Hard Charger Bonus standings, as well.

The next race for the Queenston Chevrolet Buick GMC OSCAAR Modifieds presented by Just Foam It is at Peterborough Speedway on July 31. Fans wishing to attend can purchase tickets via the track website.

Emms know what it takes to be successful at Peterborough, scoring his first career victory in the Autumn Colours Classic in 2016 there. Notably, he has no finishes worse than seventh in his last eight appearances there, with six top-five’s.

“We do have some work to do on the car this week just to keep fine tuning, but I am excited to get to Peterborough,” he said. “I know a majority of the field is going to be strong at Peterborough, and a lot of guys don’t make mistakes especially at a place like Peterborough. We’re going to have to be on top of our game and we’re just going to come in with the same attitude; at least we’ll be here the whole day next week. We’ll try to make again as few mistake as possible and try to be there at the end.”