INNISFIL, Ontario — Starting upfront, Ryan Kimball made the early pass for the lead and didn’t look back, holding off all competition en route to scoring the victory on Saturday night at Sunset Speedway.

On the drop of the green flag, Jade Franklin would check out initially, as Ryan Kimball pushed Coltin Everingham up a little for second. This would allow Kimball to take over the runner-up spot, with Howse alongside Everingham for third. Howse would get the spot on Lap 3, bringing Zardo through with him, as Hallyburton battled Everingham for fifth.

Hallyburton would get the spot on Lap 8, as Benedict and Dale Shaw battled for seventh ahead of Stade and Baker. Benedict would take over sixth a couple laps later, as Shaw got alongside Everingham for seventh.

At the front of the field, Kimball was able to track down Franklin for the top spot, getting alongside him on Lap 11, and passing him a lap later. Howse then moved into second on Lap 15, bumping Franklin back to third ahead of Zardo, Hallyburton, Benedict and Stade, as Everingham and Shaw continued to run side-by-side ahead of Baker and Shepherd.

At the front of the field, Howse would get alongside Kimball for the top spot as Franklin continued to run third ahead of Zardo, Hallyburton and Benedict. Kimball was able to fend off the initial challenge, but Howse did not fade away lightly in working back alongside. Behind them, the field began to string out with Stade up to seventh ahead of Baker, Shaw, Everingham, Shepherd, Capirchio, and Samantha Shaw.

The battle for the lead would continue on through the next several laps, with Hallyburton working his way alongside Zardo for fourth on Lap 30. He’d complete the pass a lap later, with Benedict looking to follow him through. Benedict was able to do so, taking over fifth on Lap 32. Unfortunately, Wilson headed down pit road three laps later, done for the event with brake issues.

At the front of the field, Franklin was able to make his move, getting by Howse to move into second behind Kimball. Hallyburton was next in line to challenge, with Howse coming down across his nose to spin in turn two for the yellow flag at Lap 42. With eight laps to go, Kimball led Franklin, Benedict, Stade, Zardo, Baker, Everingham, and Shepherd. 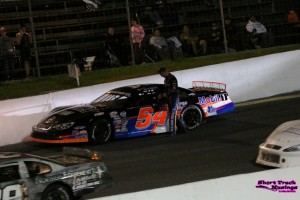 The restart would see a battle for the top spot between Kimball and Franklin, with Stade alongside Benedict for third. Unfortunately, Benedict’s strong run came to an end on Lap 46 when he stopped in turn four with a broken upper link.

The restart would see Franklin not go on the bottom lane, unfortunately suffering a broken rear end, with Zardo catching him for a piece of damage.