INNISFIL, Ontario — It was a battle that lasted all race long and came down to the final corner, but Nic Ramsay was able to make it stick on the outside to score the victory on Saturday night at Sunset Speedway. 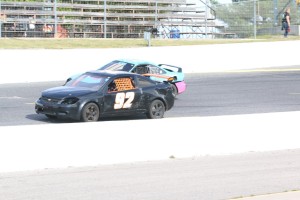 Matt Boyes edged out Ressor for the win in the third heat, with Steele third ahead of John Lavalle and Wilman. Notably, Neumeister had issues again, while Shilling was blackflagged due to smoke.

Ramsay would jump out to the early lead, bringing Steele and Jennett through with him. Boyes would also begin to make his charge, getting alongside Jennett for third, and passing him on Lap 3. The progress did not end there, with Boyes up to second just one lap later. Steele now ran third ahead of Jennett, Shilling, Ressor and John Lavalle, with Neumeister alongside Potentier.

Jennet would then get alongside Steele on Lap 6 for third, with Neumeister alongside Lavalle a lap later. The battles continued around the speedway, as Ressor challenged Shilling on Lap 8.

Everybody’s eyes focused towards the front of the field, though, as Boyes was able to track down Ramsay and get alongside him for the top spot on Lap 9. Behind them, Jennett took over third from Steele, with Ressor rounding out the top-five.

With 11 laps on the board, Boyes took over the top spot ahead of Ramsay and Jennett, as Steele was challenged for fourth by Ressor ahead of Neumeister. Shilling ran seventh ahead of Lavalle and Pontentier, until his car began to slow with a mechanical issues on Lap 14. Lavalle moved up to seventh ahead of Potentier, Christian Lavalle, Lusk, Wilman, and Vey.

Ressor’s hard work would pay off as he’d take over fourth on Lap 16, with Neumeister following him through to bump Steele back to sixth.

As the laps wound down, the battle for the lead never went away. Ramsay was able to reel Boyes back in, giving him a pair of shots as he looked to find a way around. He’d make the power move with three laps to go, getting along the outside. The pair remained side-by-side, until Boyes spun around on the last lap in turn three.

Nic Ramsay cruised to the checkered flag, with Austyn Jennett and Kyle Neumeister in toe across the finish line. However, both Jennett and Neumeister would be disqualified post-race. This would bump Calvin Ressor up to second ahead of Matt Boyes, Brandon Steele, and John Lavalle.