Brandon Watson would jump out to the early advantage ahead of Lawrence, Lapcevich, Shepherd, Pritiko, Kennington, Fitzpatrick and Gemmell. Hallyburton ran ninth ahead of Wickett, Adriaensen, Kimball, Stade, and Sheridan. Pritiko would challenge Shepherd for fourth on Lap 10, but was unable to make the pass. Meanwhile, Gemmell successfully passed Fitzpatrick for seventh, with both Kimball and Stade making their way by Adriaensen.

With 15 laps on the board, Watson led Lawrence, Lapcevich, Shepherd, Pritiko, Kennington, Fitzpatrick, Gemmell, Hallyburton, Wickett, Kimball, and Stade. Shepherd would challenge Lapcevich for third, but the caution came out with Sheridan going around off of turn two.

Watson got a good restart to hold the advantage ahead of Lawrence, with Shepherd moving into third ahead of Kennington, Lapcevich, Fitzpatrick, Pritiko, and Gemmell. Pritiko would get alongside Fitzpatrick for sixth on Lap 23, completing the pass two laps later, bringing Gemmell through with him. Fitzpatrick now ran eighth ahead of Wickett, Hallyburton, Kimball, Stade, Maginnis, Box, and Zardo. Maginnis continued to move forward, passing Stade for 12th. 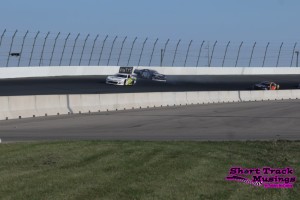 It seemed the No. 9 was on cruise control out front of the field, holding a steady advantage ahead of Lawrence despite approaching lap traffic. He would get a little shock, though, when Adams spun out right in front of him off of turn two. Watson was able to get the brakes locked up, making his way by barely unscathed without any damage as the caution came out.

Watson got a good restart ahead of Lawrence once again, with Kennington up to third as Pritiko and Shepherd battled for fourth. Pritiko got the spot on Lap 47 ahead of Shepherd, with Gemmell and Lapcevich side-by-side for sixth. Gemmell cleared Lapcevich on Lap 49, with Wickett running eighth ahead of Hallyburton, as Box and Maginniss battled for 10th. Maginnis got the spot on Lap 52 ahead of Box, Kimball, Morneau, Zardo and Sheridan.

At the front of the field, Lawrence managed to close the gap between himself and Watson, stalking the No. 9 for the lead. He’d make his move on Lap 58, passing him through turns three and four to put the No. 78 Pennzoil / APC Auto Parts Store entry into the top spot. Watson now ran second with Kennington still third ahead of Pritiko, Shepherd, Gemmell, Lapcevich, Wickett, and Hallyburton. Pritiko then got alongside Kennington on Lap 61, taking the third spot two laps later.