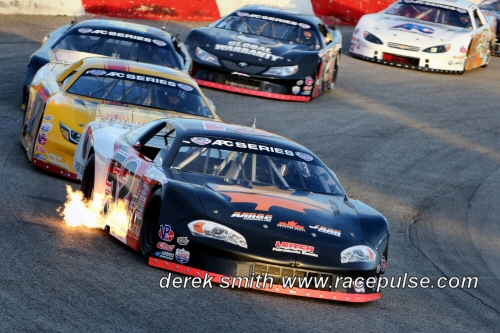 MILLGROVE, Ontario — Amidst the COVID-19 pandemic, the APC Auto Parts United Late Models of Ontario Tour has put together a schedule for the 2020 season. Fortunately, the fans at Flamboro Speedway will get to see some of the best drivers in Pro Late Models once again.

The series’ lone trip to the 1/3-mile oval as part of their five event schedule is set to take place on September 12, featuring a 100-lap feature. Originally, the series was set to visit the facility twice prior to the pandemic changing procedures.

With the current government restrictions, no spectators are allowed to be in attendance for the event. However, the APC Series has partnered with GForceTV to broadcast the event. Fans are encouraged to log on for the service free on their website at http://www.GForce.net to take in the action, as well as other racing.

The APC tour put on two stellar features at Flamboro in 2019, with both races ending in dramatic fashion.

A series of late race cautions in the June event set up a late-race shootout between eventual 2019 Series Champion Matt Pritiko and 2018 title holder J.R. Fitzpatrick. Although Fitzpatrick held the initial advantage, he would end the night in victory lane, with Pritiko spinning him on the last lap for the victory.

“Any time you’re stepping up to battle with JR (Fitzpatrick) you know it’s going to be a war,” Pritiko said post-race. “He’s a competitor. He’s one of the best guys on this roster and we all know what it takes to beat a guy like that. You can’t hold back and you can’t second-guess yourself.

“I was able to jump to his inside coming off of (turn)-2 on the last lap and I think his spotter told him that I had a run at the last moment. He did what he could to try and close the door on me but I was already there, he came down and didn’t have anywhere else to go – so we got together and he spun.

The July event would initially be dominated by Treyten Lapcevich as he looked poised to score his first career victory. however, it wouldn’t be his night. On a restart with three laps to go, Billy Schwartzenburg got the run on the outside, edging out Lapcevich by a bumper at the line for his first career series triumph.

With a history of must-see races at Flamboro Speedway, both of these races should be on the must-watch list for any race fan. Though, if you need another reason to tune in, the driver who has scored a victory at Flamboro has gone on to win the APC Series title each of the past seasons.