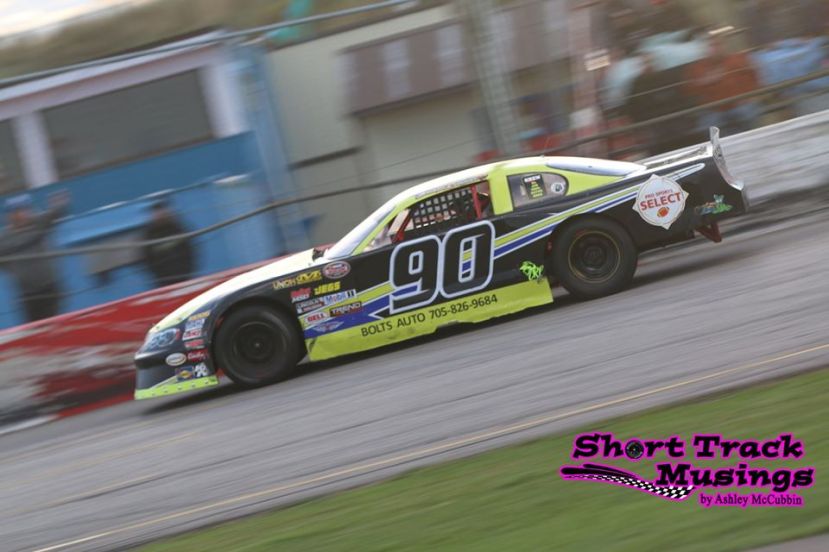 Jordan Latimer may not have had the best ending to his 2019 season courtesy of Flamboro Speedway, but that doesn’t seem to be affecting his mood heading into this weekend.

“I’m exited to get back to racing,” he said. “I’m hoping we can leave all the bad luck last year with the DNF’s and wrecks in the rear view, but keep the speed we had. We did some testing with the car to make sure we were back on track after the big wreck we had late last year at Flamboro. We replaced a bunch of suspension parts and frame work after that, but with the test we did, I’m confident we are right back to where we were speed wise and ready to take this checkered flag home.”

As mentioned, Latimer did not have the best experience in his last appearance at Flamboro. While he was able to battle up front in the midst of top-five, he found himself with front end damage after having the front end of his car launched in the air courtesy of contact with a fellow competitor.

The incident was the icing on the cake for him in 2019, as it seemed bad luck plagued him throughout the year, with mechanical problems taking him out of contention early at Sunset Speedway’s Fall Velocity.

“Like I said last year, Lady Luck was really not on our side,” he reflected. “With the wire problems, to wrecked cars and over heating issues, we really only had one solid feature in the handful of starts we made and that was Sunset’s championship night (with a third). We started at the back and drove to the front within reaching distance of the leader when the flag flew to end it.”

Now returning to Flamboro, he knows that he will once again have his hands full as the starting grid looks to be stacked across the board. As Latimer points out, there are easily 10 drivers he can count on the list with a legitimate shot at winning.

Prior to this weekend, though, Latimer notes that he had been busy through the COVID-19 quarantine period, practicing social distancing while working full-time.

Be sure to tune into GForceTV at 4pm ET at https://www.youtube.com/watch?v=UWV4ElkkUNs to check out Latimer in action.

By: Ashley McCubbin / AM Marketing