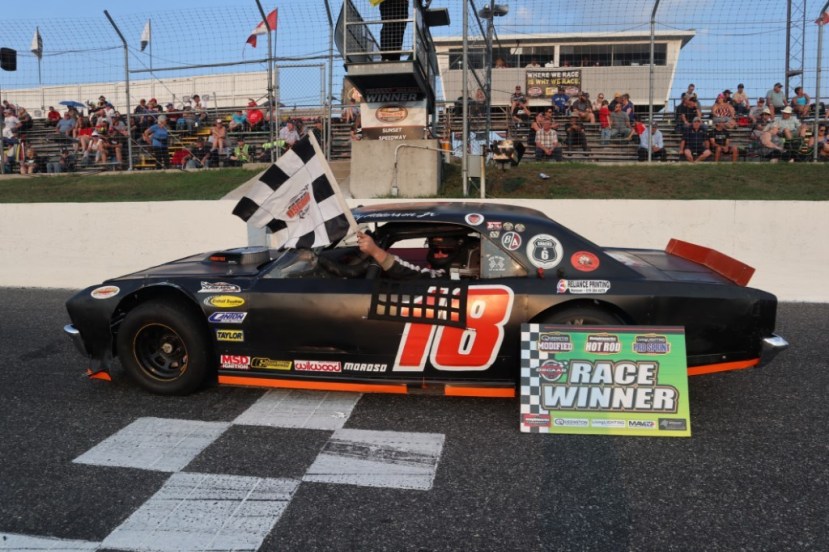 After scoring a couple victories over the past couple seasons, Billy Alderson Jr. has become a common sight at the front of the Knightworks Design OSCAAR Hot Rods presented by Sauble Falls Tent and Trailer Park field. That’s a trend that he hopes to continue heading into 2020, as long as work does not get in the way.

“I’m kind of in-between right now, but I hope I am there for the full-season,” he said. “We’re allowed to take some weight out of our car now, which is good, should speed us up a bit, and the third year in the same car helps out as well. We kind of have the car figured out for the different tracks.”

After ending off the season with a victory in the Fall Velocity at Sunset Speedway, Alderson is hopeful of holding the checkered flag plenty of times moving forward.

“Going for a lot of feature wins,” he commented. “We won’t be totally focused on the points, as it’s more about staying up front.”

With the 2020 schedule taking Alderson across the province, he notes his excited about the series’ inaugural trip to Delaware Speedway in June.

“Really looking forward to trying Delaware, because I’ve never even been to that track before,” he said. “So looking forward to Delaware, and Jukasa (Motor Speedway) – love to get back there again. Also, any chance I get to go to Sunset (Speedway), I take that as well.”

As previously noted, Alderson has become a driver that you can expect to contend for wins on a weekly basis, with his most memorable win coming being this past season’s Fall Velocity.

“That was a lot of fun; it makes us want to go for more,” he commented. “The longer races seem to help us as we normally have a good car on the long run. So 40 plus laps in a feature, that helps.

“I gambling with that race a bit. I saw Tyler Hawn get out front and I knew from the heat races that I was running the exact same times that he was, and I could tell from Lap 2 or 3 that was he was going wide open. So I decided to sit back, save the car, and let him wear his out, and towards the end of the race, I had lots of tire left and that’s when I was able to drive around him after a caution.”

Now entering the season, Alderson feels even stronger about his chances with the shift in the rules allowing him to remove some weight this season.

“Also, we’ve never had a practice day before,” he added. “So we’re going to head over to Sunset for a practice day to really try some different things out, because on a race day, you can’t really try out anything because you only have a couple practices and then you’re racing. You don’t want to make any changes then, but on practice days, you can really change anything you want and then have time to figure it out.”

However, he knows it won’t be easy each week with the numbers of entries growing each season.

“There’s more and more people come out each year, looks like we have a lot of fast cars this year which is awesome,” he said. “Looks like it’ll be a battle for each position in the top-eight, which is what we like.”

For Alderson, he got interested in racing through his father working on cars in their body shop, ultimately jumping behind the wheel himself.

Through his experience over the years, his advice for those fresh to racing is make sure to read the rulebook carefully.

“Know what car to build as you want to come out with a good piece of equipment if you plan on running up front,” he added.