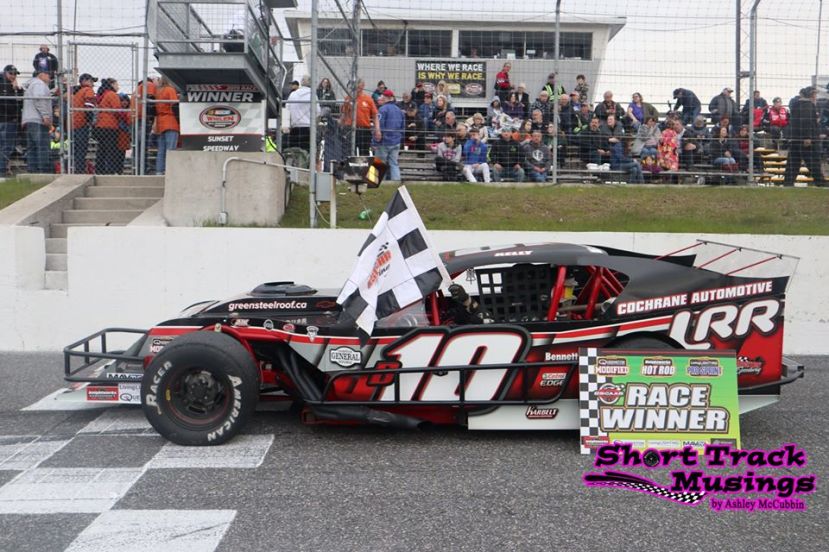 After running up front throughout the 2019 Queenston Chevrolet Buick GMC OSCAAR Modified presented by Scott Reinhart Trailer Sales Ltd., Touchwood Cabinets, and The Fyre Place & Patio Shop season, Kelly Balson is looking for more of the same this season.

After scoring five top-five’s last season including a win at Sunset Speedway, Balson feels the work that they’ve done to the chassis will make a difference in 2020.

“I think Andy (Kamrath) and Shawn (Chenoweth), our teammates and friends of ours were better, but we weren’t far off,” Balson explained. “They had a great piece, and I think they had a little better working chassis, a little more drive up off. We feel like we’ve addressed that without hurting our apex corner speed. We’ve made some changes, and the changes we made are exactly what I feel that we needed to do.

“We needed to change the front end to help our apex corner speed, and then we changed – the whole rear-end of the car is brand new. There is nothing that we ran last year back there, and it’s something that Graham T. at GTA Racing Design wanted us to do eventually. He said, ‘We’re going to run what we got to see what’s going on, but I want to eventually change it,’ so now this winter was the time.

“So we feel like we’ve made the changes we think we need to make, and I don’t see we won’t be better. So if we’re better, we should contend for wins. We were contending for wins last year, and we should be even better.”

While there’s several great stops on the 2020 schedule, the return to Sauble Speedway this year on two occasions is circled for Balson.

On top of his own outlook for the modified, he believes the team will be capable of chasing wins in the Knightworks Design OSCAAR Hot Rods presented by Sauble Falls Tent and Trailer Park as well, with Amanda Balson behind the wheel.

“I’m not going to lie to you – I keep thinking more about Amanda’s car as its brand new,” he commented. “Dan (Price) has done some really nice work and we’re going to have a few cars there and have fun.”

While there is a lot of positive momentum surrounding his program, Kelly Balson believes that extends to the series as a whole as well right now.

“I think that we have the second-best series in Canada, and I think it’s getting better and better, and I think it has a lot to do with (series president Dave) Gainforth and his crew,” Balson commented. “Basically, it’s their vision on rules and nothing is getting obsolete, and therefore, I think people are noticing fast racecars at a reasonable place and it gets people involved. They’re not a cheap racecar, but they’re not wildly expensive, and the speeds are high, and more cars breed more cars. Like, success breeds success, and I think that’s where we are. I think the overall health of the series is as good as it could possibly be.

“As a matter of fact, I’ll extend that to the Hot Rods that it’s the same thing. The rules are intact, and it’s growing and now you’re getting names like my wife Amanda, Tom Walters, and some other guys. I think OSCAAR In general is as healthy as I’ve ever seen it. It’s one of those snowball things, and it’s rolling downhill. OSCAAR is riding the wave and I think it’s mostly to do with the rules being solid and not fluctuating. You know you can buy a car and it won’t be obsolete in a year or two.”

With seeing the growth and new drivers joining the series each year, Balson’s advice to those individuals is make sure that you do your homework.

“, I would take a bit of time to go around and talk to the drivers and crew guys so you’re not making a mistake, meaning what you’re going to purchase,” he explained. “Talk people’s ears off and find what you’re going to need, before you make a mistake. Like, I see so many people buy something and make a mistake, and they’re done because not only are they frustrated, but they’re financially strapped where you essentially have to buy another car to moderately competitive.

“Know what you’re doing before you buy anything. Talk to the drivers, talk to the crew guys, talk to the owners, and they’re going to steer you in the right direction; they won’t steer you the wrong direction so that way you’re not financially strapped, frustrated, and quit.”

As preparations continue towards the 2020 campaign, Balson would like to thank London Recreational Racing, Cochrane Automotive, Brighton Speedway, The Hampton General Store, GTA racing design, Karbelt of Oshawa, and Castrol Canada for their support.