Brian Wilson: “The work on the cars is the fun part” En Route To Championship

Brian Wilson put together one of the strongest championship campaigns in history at Full Throttle Motor Speedway, but the season did not start out that way. Instead, he had only initially planned on running a partial schedule.

“But as the season rolls out, I find myself getting ready races week after week,” he told SHORT TRACK MUSINGS. “The work on the cars is the fun part to try and improve on how it was last week. When things go as they have been, being adjusted to the competition really makes it tough; to keep trying to be better is a monotonous thing. But really, it was good. I was lucky to do what I did and had a few weekend’s to travel and play in a different sand box.” 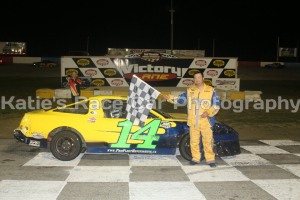 Through his own season, he was able to capture nine wins and 28 top-five’s, with just one finish outside of the top-10. Looking back, Wilson says his favourite moments from the season range from either having the two cars he prepared finish one-two, or the championship, or even just hanging with friends after the races.

However, above that, his ultimate top moment of the year was watching his 12-year-old Brian Wilson Jr. win his first race that he was ever in, hands down. Both father and son were able to be successful this year, notably, with Wilson Jr. scoring seven wins and 19 top-five’s in Full Throttle’s Kid Stock class.

The track’s range of classes allow for a lot of talent to be showcased across the board, and that is no different with the Mini Stock division.

“It’s there from time to time,” Wilson commented. “We have shown there is good cars and drivers at Full Throttle, just seems we don’t all have the time and funds to be there weekly. Sadly, that shows some weeks but there’s always two or three at least you can have great side by side races with.”

The success that he was able to have against these drivers was no easy feat, either, as Wilson says they spent “days in and days out” in the shop, which feels “nuts, mostly because there is a few cars in the shop.” Any day of the week, they can be found working in there, either on a dirt mini stock, or one of their two asphalt mini stocks, or the kid stock. 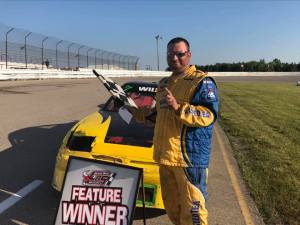 “There’s always plenty to do and beer doesn’t drink itself,” he added. “The weeks are easy if you had winning cars but still there’s always work to be done.”

Now moving ahead to the 2020 season, Wilson has yet to finalize his plans, but says the focus will be on Brian Wilson Jr. and getting him to be the main member of the team moving forward. Though with only nine Mini Stock races scheduled for Full Throttle, it certainly has left the options open, ranging from relaxing with a friend on their boat to traveling to other tracks.

“I don’t really know till the rules and schedules are final for the tracks,” he added.

In having experience working with the young drivers getting them started with his own son, he says the advice that he tries to tell rookies is always try and stay calm, and worry about what they are doing and not what others are saying.

“It’s a humbling sport,” he commented. “The highs and lows can be from lap to lap sometimes, and mostly you will meet many people that are willing to help you and share things to help improve, but every one is different. So when you listen to four people, you get 4 different things. So just take one thing at a time untill you understand what each thing does, or do what you want and enjoy it! It’s not easy, and it’s not cheap so make it enjoyable!”