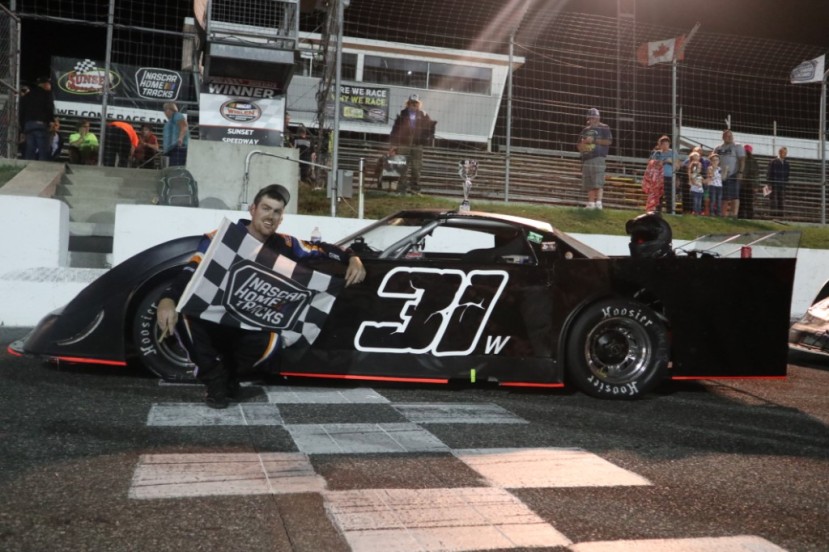 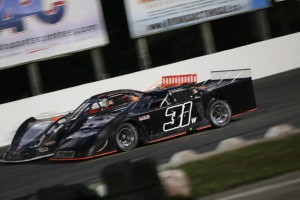 With nine laps on the board, Spencer-Walt continued to lead ahead of Cadman, Watson, Gallant and Passer, with Sikes and Foster battling for sixth. Foster took the sixth spot on Lap 11, with Jackson following through two laps later. Capirchio would move up into eighth on Lap 14 ahead of Sikes and Todd Campbell. Chris Burrows would then challenge Campbell for 10th a lap later.

The shuffling would look to continue with Gallant challenging Watson for third on Lap 21. Gallant would look to have the pass completed off of turn four, sliding up across Watson’s nose. However, he wasn’t as clear as it appeared, with contact resulting, causing Gallant to spin back across into the inside front stretch wall. After being taken to the local hospital, it was determined that Gallant suffered a pair of broken veterbraes in his back.

Following the lengthy delay, the race would restart with Capirchio snatching the lead ahead of Spencer-Walt, Cadman, Passer, Jackson and Burrows, as Watson battled Sikes for seventh. Watson would clear Sikes for seventh on Lap 29, bringing Campbell through with him. Sikes now ran ninth ahead of Richardson and Ryan Dick. Meanwhile, Foster ran into tire issues on Lap 28, forcing him pit side and ending his feature early.

The battles would continue, with Watson passing Burrows for sixth on Lap 34, with Jackson getting alongside Passer for fourth three laps later. Spencer-Walt also found his way back to the lead, passing Capirchio on Lap 46 for the top spot. Capirchio now ran second ahead of Cadman, Jackson and Passer.

Watson would then pass Passer for fourth on Lap 54. The shuffling would continue, with Cadman passing Capirchio for second on Lap 57 with the caution flying four laps later for Jackson going around in turn four.

The fourth attempt went smoothly with Spencer-Walt holding serve ahead of Cadman, Capirchio, Watson and Burrows. However, the yellow flag returned on Lap 65 as a result of debris.