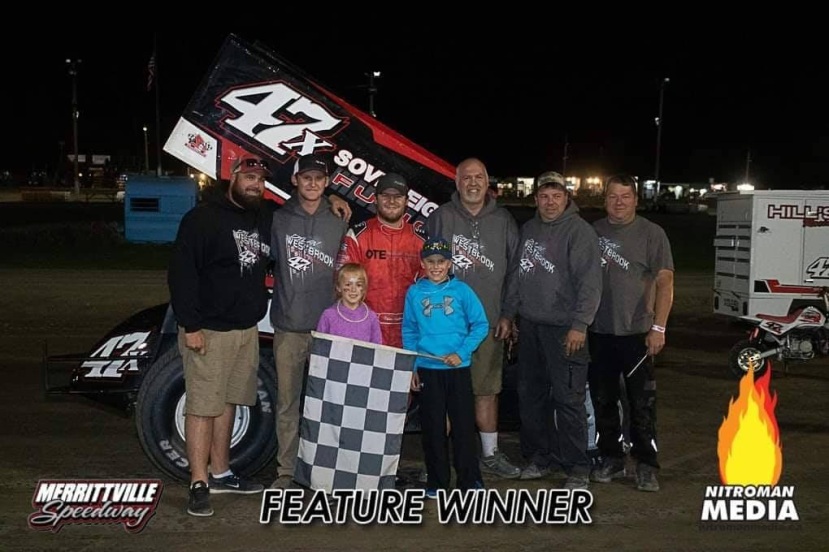 By Tommy Goudge with files from Steve Petty and Loree Ferrell

Aaron Turkey and Shawn Sliter made up the front row for the final points-paying A-Main event of the 2019 SOS season. Turkey led the first lap, but got off track in turn two and allowed Adam West and several others to get by. The yellow flag came out on lap two when Steve Lyons came to a stop with front end damage. More early yellow flags appeared for a spin by Jamie Turner and a Jim Porter crash into the inside wall in turns one and two. Sliter and Westbrook both got past West on lap three and raced hard for the lead through heavy traffic. Sliter held the lead until lap ten when he jumped the right rear tire of a car he was attempting to lap. Sliter was able to recover, but not before Westbrook took over the lead.

An exhaust part on the track in turn four brought out the yellow flag for debris on lap 14, but Westbrook took off on the restart and went on to claim the win by more than eight seconds. Cory Turner, Mitch Brown, Ryan Turner, and Shawn Sliter followed Westbrook to the finish line, however Brown was docked two positions at the conclusion of the race as officials determined that he jumped the restart on lap 14. Kyle Phillips, Jacob Dykstra, Dylan Westbrook, and Jamie Turner won the heat races for the 26 car field, while Jim Huppunen won the B-Main.

Ryan Turner’s route to the championship became tougher when he finished outside a redraw position in his heat race, but he was able to advance through the field to get credit for a podium finish after starting 13th in the A-Main. Turner entered the evening with a 15 point advantage over Mitch Brown, but that gap shrunk to 13 after heat race competition. Unofficially Ryan won the championship by 23 points over Brown; without Brown’s penalty, the final margin would have been just eight points. The championship was the second in a row for the Turner family, as Ryan’s brother Cory was the 2018 SOS champion. Cory ended up third in the championship standings, just four points behind Brown unofficially.

Notes
-Hannah Ferrell, Josh Hansen, and Dillan Sliter all ran into early trouble in the A-Main. Ferrell suffered a flat left rear tire on the first lap, while Hansen retired due to brake problems and a damaged exhaust header on lap two. Sliter stopped in a precarious position just off the backstretch with fuel injection problems just before Jim Porter’s crash, and would have brought out the yellow anyway. Sliter still ended the season on a high note though, as he claimed the 2019 SOS Rookie of the Year title.

-Jim Huppunen entered the event hoping for a repeat of his September success at Merrittville last year, but trouble in his heat race relegated Huppunen to the B-Main. He started 21st in the A-Main and charged ahead to finish 6th.

-Dylan Westbrook’s win was his third in SOS competition at Merrittville. Westbrook and Rick Wilson were tied atop the SOS Merrittville win list with two each, but Westbrook is now alone at the top. He is now also alone in third place on the overall SOS win list with a total of 19.

-Hannah Ferrell and Josh Hansen were making their first career SOS starts on Saturday, while Tom Huppunen, Brad Knab, and John Burbridge Jr. all made their first SOS starts of the season. A total of 39 drivers competed in at least one SOS event in 2019.

-Next up for the SOS is the 15th Annual Canadian Sprint Car Nationals weekend at Ohsweken Speedway on Friday, September 13 and Saturday, September 14. The SOS tour is proud to be an official affiliate sanction for this prestigious event for the 15th consecutive year. $10,000 USD awaits Saturday night’s A-Main winner, while each A-Main starter is guaranteed at least $1,000 USD. Visit www.ohswekenspeedway.ca for more information.

The Southern Ontario Sprints would like to thank their 2019 partners, including Brighton Speedway, Merrittville Speedway, Ohsweken Speedway, the National Sprint Car Hall of Fame & Museum, www.ImageFactor.ca, and Grisdale Racing Products.