HAGERSVILLE, Ontario — It appeared as though Eddie MacDonald would have a first successful trip to Jukasa Motor Speedway, but that all changed after his trip through the room of doom.

Following a second-place finish, MacDonald was disqualified as a result of an ignition box violation. 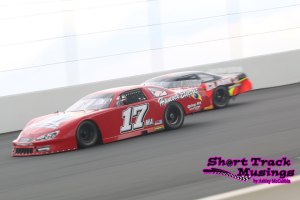 “When I got to the 17 car [of MacDonald], he buzzed too much, so we pulled the sticker off,” Tech Director Ricky Brooks explained to Speed51.com. “Some of the boxes are already sealed from APC. I used the APC seals to stick over their dials in qualifying tech.  We did not buzz or check all the boxes, we just sealed them up.  Teams presented their car, and we wouldn’t allow them to change it after qualifying.  They had theirs set at 6,900.  The rule was 6,400, so that’s where it went.”

The disqualification was chalked up to a misunderstanding between MacDonald and Brooks, as MacDonald was led to believe that Brooks set the box before placing the seal on it. Car owner Dave Lemieux issued an apology to Brooks on Monday evening.

Prior to the disqualification, MacDonald told Short Track Musings that he had a lot of fun at Jukasa Motor Speedway in his first Canadian Short Track Nationals appearance.

“My guys gave me a fast car for pretty much all weekend long; it was fast and comfortable to drive,” he said at the time. “It was a fun race, just came up a little short at the end. I wish we could’ve held onto the lead for a little bit longer at the end there and challenged a little more. Second isn’t too bad.”

While he led several laps throughout the day, MacDonald believes the big difference between first and second was the right side tires tightening the car up for the final run to the end.

Despite everything that occurred, MacDonald has expressed intent on returning to Jukasa Motor Speedway next year and beyond.

“We have to see how things play out but our plan would be to come,” he said.