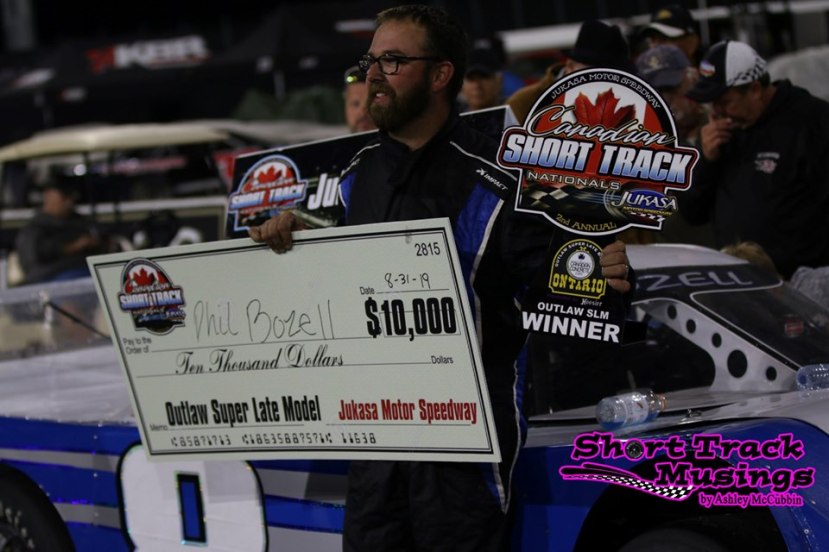 HAGERSVILLE, Ontario — It was not about having the fastest car on Saturday night at Jukasa Motor Speedway for the Ontario Outlaw Super Late Models, but instead who would be there when the checkered flag flew. Phil Bozell was the man who stood in victory lane at the race’s completion.

After qualifying fifth, Bozell stayed within the top-five through the event, slowly making up ground as competitors fell out of the event. On Lap 56 when the pair of leaders ahead of him ran into problems, Bozell inherited the lead, and held on through a late race caution to win. Andy Bozell finished second for a family one-two finish.

Series front runner Glenn Watson finished third despite being involved in the wreck on the opening lap, followed by Roy Passer and Gary McLean. John Cadman finished sixth despite his wheel falling off with four laps to go, followed by Jamie Richardson, Adrian Foster, Mike Miller, and Chris Burrows.

Cayden Lapcevich had the car to beat for the second straight year in a row, driving up into the top-three from the back before the fuel stop at the halfway break. However while leading at Lap 56, the motor would go south. JR Roahrig, who was running second, would run over a piece of debris from Lapcevich, taking him out of contention. They would be credited with 12th and 13th, respectively.

Defending race winner Tyler Roahrig was the fast qualifier, and led through the first half of the event, before pulling off with a mechanical issue.