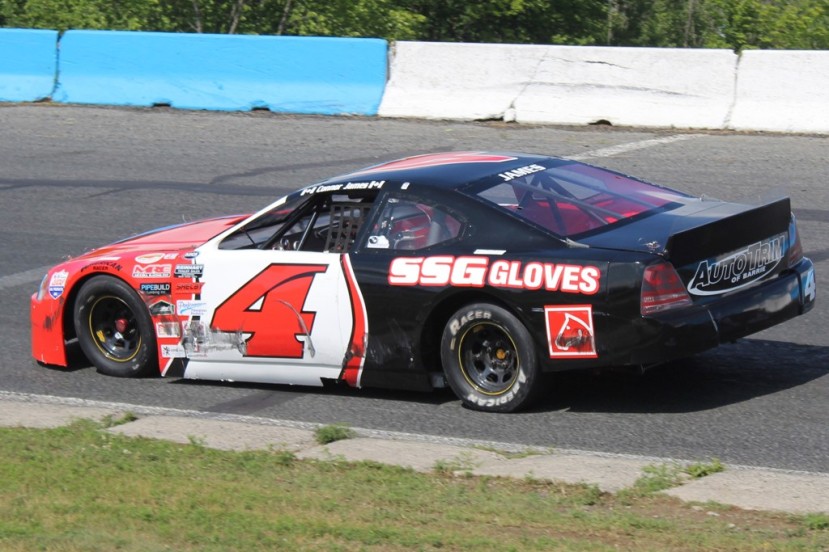 Kevin Gallant and current point leader Connor James brought the 15 car Sportsman Cup Series starting grid from the staging area for their main event. Gallant, James and Jay Doerr built-up a lead of nearly half a track, with the field encountering lapped traffic early in the 100 lapper. James started looking for a way around Gallant with about 16 circuits on the board but waited until lap 31 before he could finally complete the move. A pair of yellow flags – for issues on the 34th and 36th laps – saw some teams head to the infield pit lane, while most of the field remained on the track. James, Gallant and Doerr remained in control at the halfway mark and with 75 laps on the board, they were the only cars on the lead lap. A late race caution with just 3 laps remaining provided a chance to change the race’s outcome but Connor James held on for the win. Gallant was 2nd and despite a late race spin, Doerr 3rd. Alvin McNicol and Doug Cathcart were 4th and 5th at the checkered flag.

divisions. The current point leaders ran side-by-side for a couple of laps before Kelly took control of things. Former track champion Ryan Babin – making just his 2nd start of the year – moved into the runner-up spot with about 8 laps on the board, while Ryan Oosterholt took 3rd as the crossed flags, indicating the halfway mark were displayed. Kelly held on for the win in the caution-free event, with Oosterholt, Gould, Babin and Victor Vowles completing the top 5.

The husband and wife pairing of Jeff Dolley and Terri-Anne Whittern paced the Trent Lakes Complete Plumbing Renegade Truck ‘A’ main. Whittern led the first few laps, with Dolley and Stacy Switzer on her tail. Switzer tried to work around the inside of the #4 machine, while the leader caught the rear of the field with 13 laps on the board. Switzer managed to take the second spot and set her sights on the frontrunner with 4 laps left to go. It was ladies’ night at the checkered flag, as Whittern held-off Switzer’s late race charge in another green to checkered flag run. Nicholas Ledson, Dolley and Paul Boundy rounded-out the top 5 spots.

Tim Batty and Dave Morgan showed the way for the 25 lap Late Model feature tilt. Morgan grabbed the lead at the drop of the green flag and quickly

opened a 4 car length advantage, before a lap 3 yellow flag slowed the pace. On the restart, Morgan kept the lead with Mark Gordon on his tail. McHattie moved into 2nd on lap 7, with another yellow – this time for a first turn issue – bringing everyone back together. Four cars fought for the lead during the 12th lap, but only Morgan and McHattie came out the other side of the fray. A lap 16 yellow sent the leaders to the back of the pack, with Tim Batty and Mark Gordon in control of the field on the restart. Taking advantage of another restart with less than a handful of laps remaining saw Dan McHattie earn a trip to Dart Heating and Air Conditioning Victory Lane. Tim Batty, Jeff Walt, Mark Gordon and Kyle Batty were the next 4 across the stripe.

Christen Lavalle and Kyle Hope were on the front row as the Battlefield Equipment Rental Bone Stocks came to the Great Canadian RV green flag. Hope took the lead early and the Peterborough Speedway newcomer was turning some solid laps. Sean Kennedy used the outside line and moved into the 2nd spot, while Kris Khan – who was showing some new colours on his #48 ride – took over the lead with about 7 laps on the board. The pack started to encounter some slower traffic near halfway, but there were still some excellent battles being waged by the 24 starters. The race’s only caution flag came for a lap 16 issue in the 2nd turn, but it couldn’t derail Khan’s strong run. Kennedy held-back a charge from both Ryan Oosterholt and Corey Strawn to keep his championship hopes alive. Kyle Novis was 5th at the checkers.

Mini Stock heat races went to Ryan Oosterholt, Jassen Whyte, Jeremy Kelly and Nolan Gould. Nicholas Ledson had a pair of Renegade Truck qualifying wins, with the others going to Paul Boundy and Jeff Dolley. Late Model preliminary rounds were won by Amanda Balson, Ryan Kimball and Dan McHattie with a pair. Corey Strawn and Ryan Oosterholt each claimed a pair of Bone Stock qualifier checkered flags, with the others going to Chris Tubman and Kris Khan.

All finishing positions are unofficial and subject to scoring review, as well as post race technical and safety inspection.

Bullring bullet points: For about the 3rd time in recent weeks, a rogue storm front dropped some heavy showers on the track before racing began. A few of the practice sessions were delayed, but racing went on as scheduled…The night’s 50/50 draw – supporting the Millbrook Legion – paid almost $465 to Mike McTeer of Orono, Ontario…Former track champion Dave Morgan returned to the driver’s seat of the family-owned #10 Late Model, in relief of his son Jack… After a lengthy absence, Jeff Walt was back in action; wheeling the #99 Late Model…Bobby Cousineau returned to the Late Model ranks in the former Mike Wallace ride, while his father Robert Cousineau was back in the #2 machine.

Mark Saturday, August 17th on your racing calendar for the year’s 3rd and final Summer Toonie Night, presented by Pepsi. A great night of racing with the hometown Bone Stock, Renegade Truck, Super Stock divisions, with a 50 lap Late Model feature; plus the Ontario Pro Challenge Series is just $2.00. A fan appreciation meet and greet autograph session will be held at intermission. Pit gates open at 1:30, with the grandstands unlocked at 4:00 and racing at 5:00.

A quick visit to www.peterboroughspeedway.com, or the track’s Facebook and Twitter social media feeds will give you all the details you need as the 2019 regular season winds-down at the tight, tricky bullring on Mount Pleasant Road. There is also a free app available for Smartphone users.