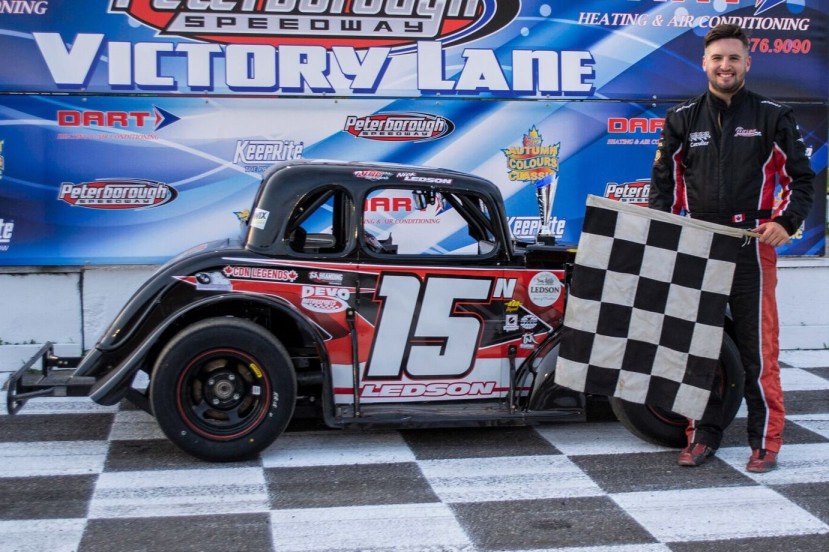 Central Ontario’s best put it all on the line to wrap-up another month of the 2019 regular season – Saturday, July 27th – at Peterborough Speedway. Local runners in the hometown Mini Stock, Super Stock, Renegade Truck and Late Model divisions were joined by the Ontario Modifieds Racing Series and a pair of feature events for the Ontario Legends to thrill the crown at the tight, tricky bullring on Mount Pleasant Road.

Andre Fiorini and Nicholas Ledson brought the field of 20 Trailers Plus Ontario Legends Series teams to the line for their first of 2 feature events. Ledson took the early lead, with Kevin Foisy slipping into 3rd with a hat trick of laps on the board. The first caution flag – for a front stretch issue – put the pack back together with Ledson, Fiorini and Foisy taking off in a 3 car breakaway on the restart. The #15N was in control of the field for nearly the entire race distance – surrendering the top spot to Fiorini at lap 15 – and through lapped traffic to take the win. Foisy, Fiorini, Parker Traves and Kenny McNicol Jr. followed Ledson across the line to complete the top 5.

early lead, with the division’s current point leader Dan McHattie working the high and low lines to get closer to the front of the pack. As the field started getting through the backmarkers at the halfway point, McHattie was 3rd at lap 13 and Amanda Balson grabbed the lead a lap later. The race’s lone caution flag – for a front stretch issue – brought everyone back together, with McHattie taking a lead he wouldn’t surrender on the restart. Gordon, another impressive run by Jack Morgan, James Horner and Balson rounded-out the top 5.

Kenny McNicol Jr. and Kevin Foisy showed the way from the staging area for the 2nd Ontario Legends Series feature. A quick yellow flag flew before a single lap had been scored, necessitating a complete restart. McNicol had control of the field on the restart, with Ledson and Foisy hot on his tail. Ledson took over the lead with a handful of laps complete, as the field started to work through slower traffic with about 11 laps on the scoreboard. The yellow waved for a turn 2 incident with less than 10 laps remaining, creating an all-out fight for position. Ledson – a former series champion – had the right stuff all night and took the win over Foisy, Fiorini, Parker Traves and Dawson Drimmie.

With Dan Archibald and Tim Burke on the front row and 20 laps to settle the score, the KOD Disposal Super Stocks kicked-off their feature tilt. Archibald took the lead at the drop of the green, with Burke and a hard charging Mark Gordon – who was looking for his 4th straight win – looking to unseat the driver of the #07 machine. Even a yellow flag for a 4th turn wreck couldn’t keep Archibald from the checkered flag. Gordon made it to the runner-up spot with Burke, Kyle Gordon and Tony Tiemersma chasing the lead duo across the line.

powered by Torque Builders Inc. and Gen-3 Electrical came to the line for their 25 lap feature. Hollingsworth and Rick Warnes led a breakaway from the inside line, as a 4 car battle for the 3rd position was being waged behind them. Rob Warnes held it first, with Nick Lees taking the spot with a lap 6 pass. Lees and Chad Strawn were part of a 4 car fight for the lead, with Strawn taking the position on lap 11. John Baker Jr. used lapped traffic to his advantage to wrestle the lead away with a lap 21 pass and held-off Strawn for his 2nd with of the year. Dwight Brown, Lees and Alex Cuzzilla finished-out the fast 5.

Paul Boundy and Stacy Switzer brought the Trent Lakes Complete Plumbing Renegade Truck field from the staging area for a 20 lap feature event. Boundy used the inside line to take an early lead, but there was plenty of action in his rear-view mirror. With a handful of laps remaining on the scoreboard, Nicholas Ledson – who is sharing the #26 machine with Brad Lavalle this year – took the lead and scored his 3rd feature win of the night. Switzer, Alex McGibbon, Boundy and Bill O’Hara followed Ledson to the checkered flag.

on Mount Pleasant Road. After watching the Modifieds and Renegade Trucks set the mark with caution-free features before them, there were big shoes to fill. Whyte and Gould ran side-by-side for the first 7 circuits of the 20 lapper before Gould found the break he’d been searching for. While the field worked through slower traffic, the #28 machine of Nolan Gould built-up a huge lead for the win. Ember Junkin slipped past Whyte for the runner-up spot, with Tiffany Vandebelt and Ryan Oosterholt next in the running order.

All finishing positions are unofficial and subject to scoring review, as well as post race safety and technical inspection.

Bullring bullet points: Karl Dings of Plainfield, Ontario – just north of Belleville – won the 50/50 draw for $432.00…John Bates and 15-year-old go karting graduate Nathan Brooks made their stock car racing debut in the Mini Stock and Renegade Truck fields respectively, while James Horner and Stephen Bierworth had their first 2019 starts in the Late Model and Renegade Truck divisions…Tony Tiemersma took a turn at the controls of Howie Crowe’s #28 Super Stock…Dave Riopelle and Paul Boundy each made hard contact with the retaining wall in their respective Ontario Legends and Super Stock features. Neither driver was injured, but their cars were through for the night.

This year’s edition of the Hot August Nights Racing Series takes the green flag Saturday, August 3rd as the OSCAAR Modifieds and Pro Sprints join the fan favourite Bone Stock, Mini Stock teams and a 30 Super Stock qualifier for the Canadian Short Track Nationals; with a pre-race corn roast to kick-off the evening’s action. Pit gates open at 2:00, with spectator grandstands unlocked at 4:00 and the night’s first green flag at 6:00.

Go to www.peterboroughspeedway.com, Facebook or Twitter for complete news and information. There is also a free track app available for smartphone users.