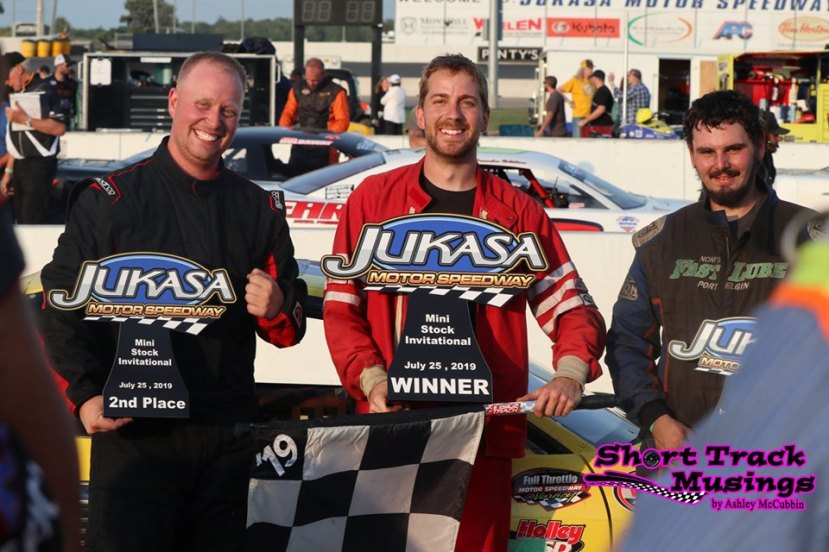 Running up front throughout the event, Doug Butler put together a combination of speed, and being in the right place at the right time, to score the victory in the 35-lap feature on Thursday night at Jukasa Motor Speedway.

Doug Butler would break out into the early lead on the opening lap, followed by Yorke and Corcoran, as Paxton and Sharpe battled for fourth ahead of Young. Meanwhile, Paradzinski’s race ended early as he headed into the pits on Lap 2. Sharpe would take over fourth on Lap 3, before moving up into third two laps later. Paxton now ran fourth ahead of Corcoran and Young, as Dippel and Shaw battled for seventh.

Shaw moved into seventh on Lap 11, bringing Gibbons through with her as Taylor and Dippel ran side-by-side for ninth ahead of Gould and Wilson. Taylor would get the spot on Lap 14.

At the front of the field, Butler continued to lead, with Sharpe moving into second on Lap 16 ahead of Yorke, Paxton, Corcoran, Young, Gibbons, Shaw, Taylor, Dippel, Gould, and Wilson. Yorke would get alongside Paxton for third on Lap 18, with Sharpe alongside Butler for the lead a lap later. Dylan Sharpe moved into the top spot on Lap 20 ahead of Butler, Paxton, Yorke, Corcoran, Gibbons, Young, Shaw and Taylor. Gibbons continued to move forward, passing Corcoran for fifth on Lap 22.

Sharpe’s dream run would not come together as he envisioned, with him heading into the pits on Lap 24 with a tire issue. This would hand the lead back to Doug Butler, ahead of Paxton, Gibbons, Yorke, and Shaw. Shaw would continue her late race charge, passing Yorke for fourth with four laps to go.