INNISFIL, Ontario — Tyler Hawn has figured out the route to victory lane, and did so once again on Saturday night at Sunset Speedway, winning the 35-lap Knightworks Design, Scott Reinhart Trailer Sales Ltd feature presented by Fox’s Bakery & Deli, and TSS Top Shops. 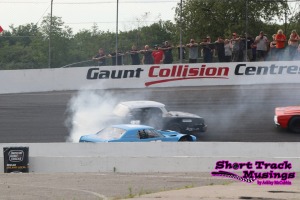 The second heat would see Drew Robertson get loose off of turn four, before contact was made with Dan Rothwell, causing serious damage to both vehicles. Billy Alderson Jr. picked up the win in his OSCAAR return ahead of Dalen Martin, Tyler Hawn, Sean Walker, Robert Robinson, and Derek Henderson.

The drop of the green flag would see a battle for the lead, with Tyler Hawn taking the top spot on Lap 2 ahead of Martin and Senior, with Book up to third ahead of Wark and Alderson. Alderson would make the move up to fourth, getting alongside Book for third. He’d be unable to complete the pass, with Book getting alongside Senior for third instead.

Alderson would clear Book for third on Lap 12, with Senior continuing to run fifth ahead of Wark, Misener, Walker, Mayhew, Clarke, Henderson, Parsons, and Robinson. Mayhew would get alongside Walker for eighth, but the caution would come out a lap later for an incident in turn three involving Martin and Alderson.

Hawn got a good restart to keep the lead ahead of Book, Senior, Wark, Misener, and Mayhew. Meanwhile, Robinson would be brought down pit road as a result of a black flag for smoke trailing. As Walker and Clarke ran side-by-side for seventh, the caution came out a second time, this time for Martin going around in turn two.

Hawn got a good restart ahead of Book, with Wark moving up into third ahead of Senior, Misener, Clarke, Alderson, and Mayhew, with Walker and Henderson side-by-side for ninth. Alderson would then get alongside Clarke for sixth at Lap 24 as Alderson tried pushing Misener ahead a little. Further up the field, Wark would get alongside Book for second on Lap 25, clearing him a lap later before the caution came out for Martin going around in turn two once again.

The good restarts continued for Hawn, as he’d hold off the charge from Wark with Book in third ahead of Alderson, Senior, Clarke, Misener, Mayhew, and Henderson. Alderson would then challenge Book for the third spot with five laps to go, with the pair battling down to the checkered flag. 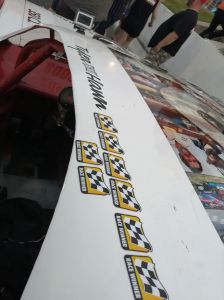 The next race for the Knightworks Design OSCAAR Hot Rods is at Brighton Speedway on August 10, with sponsorship from Excess Storage, McDonalds Brighton, and Just Like Home Dog Care Centre.