FRIDAY JULY 12TH A BEAUTIFUL NIGHT FOR RACING AT DELAWARE 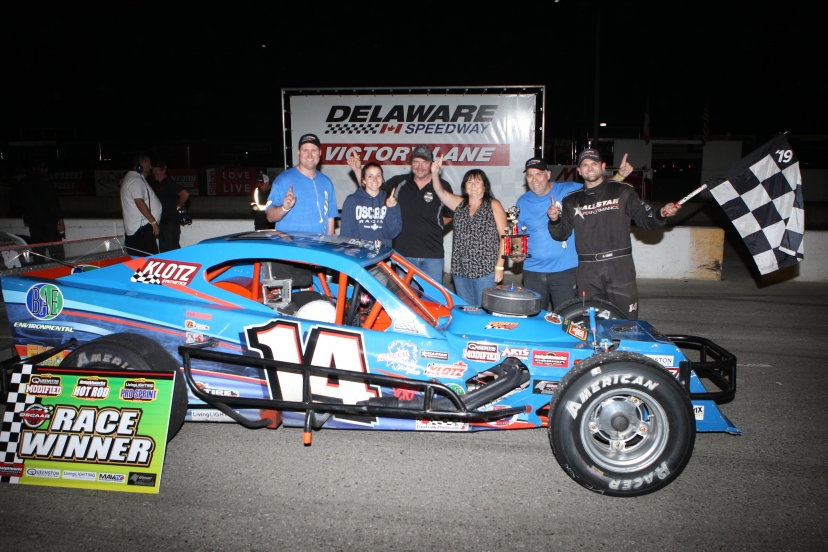 Delaware Speedway, Friday July12th. A beautiful night for racing, not a cloud in the sky. Clear weather brought out overflowing pits and a great crowd in the stands and adorning the hillside.  It was a huge, exciting program consisting of TransAxle Super Stocks, Demar Aggregates Trucks, Doxtator Property Maintenance V8 Stocks, D.A.D.S. Bone Stocks and to top all that off, the OSCAAR Open Wheel Modifieds. This was their first appearance in a couple of years at Delaware.  Being an evening honouring Jesse’s Journey, the crowd was treated to a display of nostalgic vehicles and at intermission, you could walk a lap of the track for a donation to the charity.

Heat races for all divisions were up first, with rookie Ryan Dyson in his #28 picking up his first win ever with a strong run in the Truck Division.  Perennial favorite Barry Watson #45 took the V8 Stock Heat over a close following Paul Fothergill #33. Onto the Super Stocks heats with rookie Derek Moesker in the #51 taking his first win in that division and Rick Verberne in the #21 taking the second heat.  For the Bone Stocks, Mike Ebert in the #87 was victorious in the first Heat and Chris Radder #31 had a dominating win in Heat #2.

For the Open Wheel Modifieds, Anthony DiBello in his #16, won in dominating fashion in Heat #1 and A.J. Emms won the Heat #2 in his blue #14.

First Feature up was the always entertaining combination Demar Aggregates Trucks / Doxtator Property Maintenance V8 Stock race for 25 laps. Fans were not disappointed!  Rookie Austin Gauld in the #18 Truck led them to green, with another rookie, Ray Janisse in his #29 V8 Stock, looking very strong, took over the lead on the back straight. Janisse looked very comfortable up front, while a war was going on behind him. By lap 10, hard charger Paul Fothergill #33 had moved into 2nd and was closing in on the leader. Caution came out on lap 12 when Connor Van Steensel #71 truck stopped in turn 3. A tough year for the #71 Truck continues. On the restart, Fothergill powered his way into the lead, with Janisse 2nd, Barry Watson in his the 45 V8 Stock in 3rd and the Trucks of Lonny Thompson #4 and Austin Gauld #18 rounding out the top 5. The battles behind the top 5 were intense, with drivers exchanging positions on every lap. Caution on lap number 17 for a spin by driver Joe Windis in his former truck , now the 44, substituting for Jacob Campbell.  After pleasantries were exchanged between Windis and Bill Brekelmans in his V8 Stock #07, the green unfolds for the restart. Caution comes back out on lap 21, when more discussions were taking place between the two drivers, but this time it was Brekelmans who spins in turn 3. With a battle raging up front with Fothergill and Watson, caution reappears on lap 24, when, you guess it, Windis and Brekelmans finished off their conversation in turn 2 with now damage to both vehicles. Windis was through for the night and Brekelmans was able to finish the race with damage.  A green white, checker finished the race with Paul Fothergill #33, holding off Barry Watson in his #45, both in V8 Stocks, Lonny Thompson #4 Truck in a great run and Kyle Mezenberg in his #810 V8 Stock rounding out the top four. Strong runs by Truck Rookies, Ryan Dyson #28 and Austin Gauld #18 finishing 5th and 6th.

Transaxle Super Stocks were up next with their 30 lap Jukasa Speedway Short Track Nationals qualifier. Derek Moesker #51 led the field to the green, with Rick Verberne #21 taking over before the lap was completed. By lap 5, Verberne had a 4 car length lead over the tight pack of Andrew Ferreira #9, David McCullough #39, Trevor Collver #1 and Kathleen Green in her #16. Lap 10 showed Verberne increasing his lead to 10 car lengths showing major speed, but now Jamie Klumper in his #07 moved into the top five. On lap 23, Samantha Pilkey in her #10 got sideways in turn 4, and Trevor Collver spun his #1 to avoid. No damage other than both cars go to the back of the pack, taking Collver out of his top 5 position. On the restart, McCullough makes a great move from 3rd to first. Verberne drops to 3rd with Ferreira taking over 2nd in a frenzy of moves by the top 3.  Three laps later Verberne is back in 2nd after a tough battle with the #9 of Ferreira. With 2 laps to go a major two car wreck on the front straight brings out the red.  Samantha Pilkey #10 gets loose coming down the front straight and Kathleen Green #16, having absolutely no place to go, makes a hard hit into the #10 car. Both are through for the night. Green flag comes out with 2 laps to go and David McCullough #39 takes the feature win and the Jukasa Qualifier.   Verberne survives for 2nd place, Ferreira gets a strong 3rd. Collver #1 storms from the back of the pack to get 4th and Jamie Klumper #07 rounds out the top five. Rookie Ryan Bright #45 makes a nice run to finish 6th.

OSCAAR Modifieds lined up for their 40 lap feature with Anthony DiBello #16 leading the way. By lap 3, Jason Keen #18 and Shawn Chenoweth #89c had moved into 2nd and 3rd.  Lap 7 showed local driver Jeff Showler #4 and A.J. Emms #14 moving into the top 5. DiBello had moved out to a 5 car length lead when Chenoweth passed Keen for 2nd on lap 12. Keen seemed to lose the handling at this point as Emms and Showler both got by the #18.  The top 5 were in a train all running very strong. Caution flag comes out on lap 22 when Chenoweth gets sideways coming out of turn 2 and stops on the back straight. He goes down pit road to be checked and heads to the back on the restart.  Emms, who has moved into second when Chenoweth stopped, grabs the lead on the restart and starts pulling away.  Top 5 remain the same for several laps with Emms #14 leading by 15 car lengths. At the finish, A.J. Emms grabs the win with a commanding lead. Early leader DeBello #16 gets 2nd, Dale Reinhart #51 gets third, Cory Horner #79h fourth and Norman Newman #11 rounds out the top five all in a group at the finish.

D.A.D.S. Bone Stocks finished off the evening with their 30 lap Feature. Chris Radder #31, fresh off and dominating Heat win earlier in the evening led them to green. By lap 5, Radder lead Jordan Morris #73 and Jo Lawrence in the 50.  Top five cars were all very closely matched. Lap 9 showed Lawrence moving around Morris into 2nd.  Just over the hallway point, Morris #73 moves back around Lawrence #50 to regain 2nd. In another flip, on lap 17, Lawrence takes 2nd back from Morris again. Top 8 cars ran all in train, nose to tail at this point. With 5 laps to go Chris Radder had a 5 car length lead over Lawrence, #50, Matt Langford #03 and Jordan Morris #73.  Coming down for the white flag, Radder is in heavy traffic when he suddenly slows.  At the finish it’s Jo Lawrence #50, Matt Langford #03 in a strong outing, Jordan Morris #73 in 3rd, Brent Pelly 4th and Mike Ebert #87 rounding out the top five.