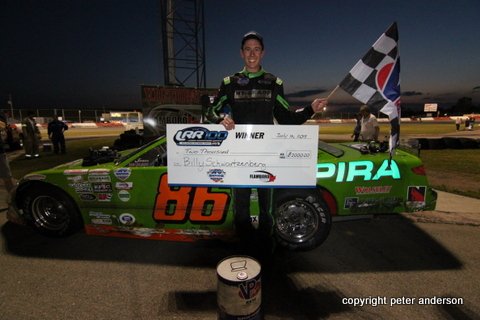 HAMILTON, Ontario — Billy Schwartzenburg’s experience at Flamboro Speedway paid off on Saturday night, as he was able to pick up his first career APC Auto Parts United Late Models of Ontario victory in the London Recreational Racing 100.

Starting 11th, the Spira Racing driver avoided the numerous incidents throughout the 100-lap feature, slowly making his way to the front. He would crack the top-five with 25 laps to go, moving up to third on a wild restart on Lap 85. He would then avoid an incident between J.R. Fitzpatrick and Shae Gemmell to move up into second. 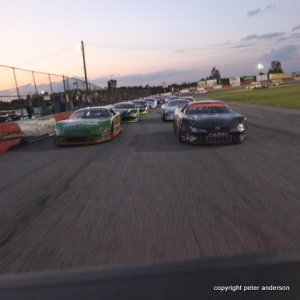 Restarting on the outside with three laps to go, Billy Schwartzenburg would get a run on the outside, edging out Treyten Lapcevich at the line by a bumper. The runner-up for Lapcevich is an APC Series career-best after dominating the event. Quicker qualifier Ryan Kimball finished third, followed by Josh Stade and Jake Sheridan.

With 11 different cautions throughout the event, there were several cars that did not complete all the laps. Those drivers include Brandon Verhoeven, Tyler Di Venanzo, Hudson Nagy, Shae Gemmell, Jamie Cox, Todd Delisle, Dale Shaw, and Gord Shepherd. 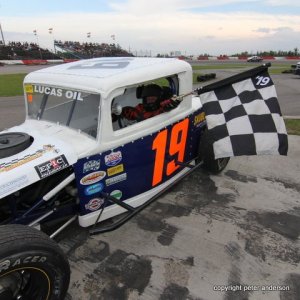 TJ Marshall made his way through the field in the second feature for his second feature victory of 2019 ahead of Mike Podd, Jeremy Barton, Max Wright, John Karley, Steve Trendell, Ian McInyre, and Amanda Stoner.

Jordan Morris crossed the finish line ahead of the field in the first feature, but would lose the victory in post-race technical inspection. Mark Thorne finished second for his 12 top-five, followed by Dale Lucas, Bobby Mercer, and Leo Labarbera. 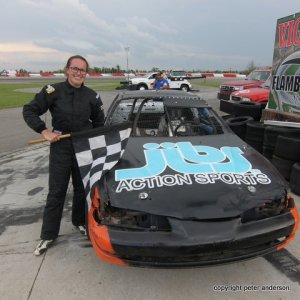 Virtue of finishing deep in the back half of the field for the first feature, Gillian Hils used her strong starting spot to win the second feature for her fourth victory of 2019. Mark Thorne finished second, followed by Andrew Packer, Bobby Mercer, and Leo Labarbera.

Thanks to Ingrid Hartman for the feature videos from the night.

Thanks to Peter Anderson for all of the photos from the night.

Some of the APC drivers will be returning to Flamboro Speedway on Saturday night, as they will be competing in the track’s own Grisdale Racing Products Late Model division against our track regulars. See the likes of J.R. Fitzpatrick, Kevin Albers, the Burbridge brothers, and Chad Corcoran battle, among with other stars of late model competition.

They will be joined by the T.Q. Can-Am Midgets as they come off an exciting event at Sunset Speedway that saw Darren Dryden sweep the night. The Ray’s Towing & Recovery Super Stocks, Klotz Auto Repair & Machine Shop Mini Stocks, and Pro 4 Modifieds will also be in action. The pit gate opens at 4pm, followed by the front gate opening at 5pm with racing starting at 6:30pm.

Admission prices, along with the full schedule for Flamboro Speedway this season can be found on the track’s website at http://www.flamborospeedway.ca. Be sure to keep up with the latest by following the speedway on Twitter at https://twitter.com/FlamboroSpdwy and Instagram at https://www.instagram.com/flamborospeedway.