Playing the patient game throughout the feature, Nolan Gould would make the pass in the late stages to get the lead and win the Jiffy Lube Mini Stock feature on Saturday night at Peterborough Speedway.

James Townsend won the third heat ahead of Ember Junkin, Hannah, the 80, Kelly, Demers, Babin, Brooks, Brier, the 38, Novis, and the 53. Notably, Novis took a slide through the backstretch grass without a caution mid-race.

Gil Brooks broke into the early lead on Lap 3 ahead of Junkin, Missons, Gould, and Hannah, as Oosterholt and Bullen ran side-by-side for sixth. Missons would move into second on Lap 5, with Gould following him through a lap later. Meanwhile, Vandebelt headed down pit road with an issue.

It wouldn’t take long for Kent Missons to get to the top spot, as he was able to take over the lead on Lap 7. Gould would move into second before the caution fell for Strutt going around in turn four. With 12 laps to go, Missons led Gould, Brooks, Ember Junkin, Hannah, Townsend, Jeremy Kelly, Bullen, Tyler Junkin, Oosterholt, Lavoie, Bennett, Babin, and the 53.

Missons got a good restart, keeping himself ahead of Gould and Brooks. Ember Junkin would then get alongside Brooks for third on Lap 9, with him keeping the spot as Tyler Junkin and Townsend took Ember three-wide. The action would be slowed, though, with the yellow flag waving for Hannah going around in turn one.

The restart saw a brief battle for the lead, but Missons was able to hold onto the lead ahead of Gould, as Ember Junkin moved into third, with Townsend and Kelly following her through. 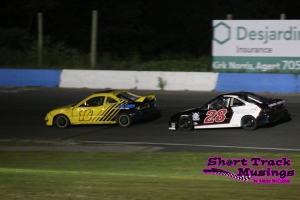 With 16 laps on the board, Missons continued to lead ahead of Gould, with Townsend getting by Junkin for third a lap later. Kelly ran fifth ahead of Tyler Junkin, as Brooks battled Oosterholt for seventh.

As the race went on, the handling would continue to go away on Missons’ car, with him slipping off of the corner. With the bottom lane open, Gould took advantage, putting his nose in there and making the pass on the last lap.