Following a back and forth battle throughout the race, Connor James was able to take the advantage in the stages of the Lucas Oil Sportsman Cup Series Open Door Windows and Doors 100 to score the victory. 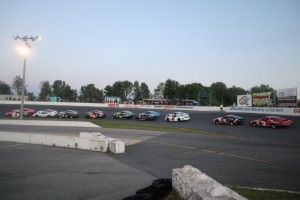 Though once the five car invert was conducted with the help of some fans from the stands, it’d be Connor James starting pole ahead of Michael Hryniuk, Kevin Allen, Jay Doerr, and Doug Catchcart. Kevin Gallant would start sixth ahead of Kevin Trevelin, Tim Tolton, Anthony Folino, and Brent Wheller.

Connor James grabbed the early advantage with Allen moving into second ahead of Hryniuk. However, the caution would come out on Lap 2 for Tolton going for a spin.

James got a good restart to retain the advantage ahead of Allen, as Cathcart and Hryniuk battled for third ahead of Trevelin, Doerr, Wheller, and Gallant. Hryniuk moved into third on Lap 5, with Wheller getting alongside Doerr a lap later. Wheller moved into sixth on Lap 8 ahead of Doerr, as Gallant continued to run eighth ahead of Trafford, Merrifield, and McNicol.

Trevelin would get alongside Cathcart for fourth on Lap 11, but was unable to complete the pass before the caution waved two laps later for Merrifield spinning in turn two.

The restart saw a battle for the lead between James and Allen, as Hryniuk and Travelin battled for fourth, with Wheller and Cathcart side-by-side for sixth. Allen would grab the advantage on Lap 17 ahead of James, with Hryniuk holding onto third ahead of Travelin as the battle for sixth continue ahead of Doerr, with Tolton alongside Tolton for ninth.

Wheller would move into sixth ahead of Cathcart and Doerr, with the caution coming out a lap later on Lap 21 for Schulthesiss going around. Under caution, Trafford and McGlynn both headed down pit road.

The first attempt at a restart would produce the third caution with Wheller going around in turn four. The second went smoothly with Allen continuing to lead ahead of James, as Trevelin and Hryniuk battled for third, with Cathcart and Doerr side-by-side for fifth ahead of Gallant. The green flag action did not last long, though, with the caution coming out on Lap 27 for Wheller and Trafford both going around in turn two.

Allen would get a good restart ahead of James and Tremble, with Hryniuk and Cathcart rounding out the top-five. Tim Tolton ran sixth, with Gallant and Folino side-by-side for seventh ahead of Patrick, Wheller, McNicol, and Doerr. Gallant would take the seventh spot on Lap 28 ahead of Folino, Wheller, Patrick, with Doerr and McNicol side-by-side for 11th.

Behind them, McGlynn ran 13th, with Merrifield and Trafford side-by-side for 14th. Trafford got the spot on Lap 30 ahead of Merrifield, with Schultheiss in 16th.

Wheller would look to challenge Folino eighth on Lap 31, but it wouldn’t go smoothly as contact was made, causing both of them to spin around. Under the yellow flag, McGlynn headed down pit road. With 69 laps to go, Allen led James, Travelin, Hryniuk, Cathcart, Tolton, and Gallant.

The first attempt at a restart would produce the sixth caution with Folino going around in turn four. The second attempt went smoothly, with a battle for the lead between Allen and James, with Allen taking the top spot on Lap 36 ahead of James, Cathcart, Trevelin, and Gallant. Doerr would run sixth, followed by Hryniuk and Tolton, with McNicol and Patrick side-by-side for ninth.

The battles continued around the track, with Gallant getting alongside Trevelin for fourth. Gallant got the spot on Lap 40, bringing Doerr through with him to bump Trevelin back to sixth. Hryniuk ran seventh ahead of Tolton, McNicol, Wheller, Patrick, Trafford, Folino, McGlynn, and Merrifield.

Gallant continued to move forward, getting alongside Cathcart for third on Lap 44. He’d take the spot a lap later, with Doerr looking to follow him through. Trevelin continued to run sixth ahead of Hryniuk, Tolton, McNicol, Wheller, Patrick, Folino, McGlynn, and Merrifield.

Doerr also looking to keep moving forward, getting alongside Gallant for third on Lap 49. He’d take the spot a lap later, with Cathcart continuing to run fifth. The seventh caution then came out three laps later for Patrick going around in turn two.

The restart went a little wild, with McNicol sliding through turns one and two, followed by Folino going for his own slide through turns three and four. The eyes of the fans were on the front of the field, with a bit of bumper tag between Allen and James for the top two spots. Their bumper tag was shortly lived, with the caution coming out on Lap 57 for Hryniuk spinning Trevelin in turn three.

The restart saw another battle for the lead, with James taking the top spot on Lap 67 with Doerr in third ahead of Gallant and Cathcart. Wheller ran sixth, followed by Hryniuk, Patrick, and Folino. The caution then flew a lap later, for Folino going around once again. Race officials would make the decision to park Folino for the rest of the event.

James got a good restart to retain the advantage ahead of the field, with Allen still second ahead of Doerr, Gallant, and Cathcart. Wheller ran sixth, followed by Hryniuk and Tolton, with McNicol and Patrick side-by-side for ninth. Behind them, McGlynn and Merrifield ran side-by-side for 11th, with Merrifield getting the spot with 18 laps to go.

At the front of the field, Connor James would be on cruise control en route to winning the event. He currently sits atop the points standings, tied for the top spit with Jay Doerr.